Researchers Reveal How Global Warming Could Cause Animals To Shrink; 'Temperature-Size Rule' 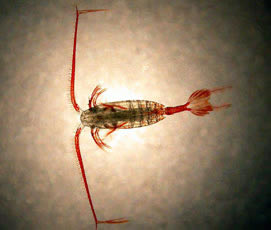 Calanus propinquus, one of the organisms investigated in this study Â© Pete Lens, British Antarctic Survey

LONDON, England -- The way in which global warming causes many of the world's organisms to shrink has been revealed by new research from Queen Mary, University of London.

Almost all cold-blooded organisms are affected by a phenomenon known as the 'temperature-size rule', which describes how individuals of the same species reach a smaller adult size when reared at warmer temperatures. But until now, scientists have not fully understood how these size changes take place.

Writing in the journal The American Naturalist, Dr Andrew Hirst and colleagues from Queen Mary's School of Biological and Chemical Sciences explore this unusual shrinking effect in more detail, and show conclusively how it occurs.

Funded by the Natural Environment Research Council, the study was carried out using data on marine planktonic copepods. These tiny crustaceans are the main animal plankton in the world's oceans and are important grazers of smaller plankton and a food source for larger fish, birds and marine mammals.

By gathering together more than 40 years of research studying the effect of temperature on these organisms, their results show that growth rate (how fast mass is accumulated) and development rate (how fast an individual passes through its life stages) are consistently decoupled in a range of species, with development being more sensitive to temperature than growth.

Dr Hirst explains: "We've shown that growth and development increase at different rates as temperatures warm. The consequences are that at warmer temperatures a species grows faster but matures even faster still, resulting in them achieving a smaller adult size.

"Decoupling of these rates could have important consequences for individual species and ecosystems," he added.

The team's findings suggest that rates fundamental to all organisms (such as mortality, reproduction and feeding), may not change in synch with one another in a warming world. This could have profound implications for understanding how organisms work, and impact on entire food webs and the world's ecosystems.

Although the team's findings disagree with earlier assertions of many macro-ecologists, they clearly explain the smaller sizes associated with the 'temperature-size rule'. They hope their work will help those investigating the potential impacts of climate change on the natural world.