Florida Treasure Hunters Lose Court Battle, Ordered To Turn Over 17 Tons Of Gold And Silver To Spain; 'We Will Object'

Odyssey Motion Granted To File Objections In 'Black Swan' Treasure Case; 'I Have Confidence In Our Legal System' 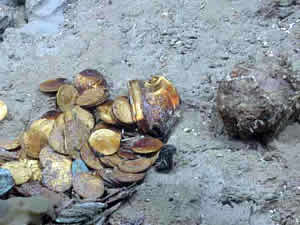 TAMPA, Florida -- Odyssey Marine Exploration, Inc., today announced that it will request an en banc hearing (a hearing before all the Eleventh Circuit Court of Appeals judges) in the "Black Swan" case and will point out that today's decision by a panel of only three judges from the Eleventh Circuit affirming the district court's dismissal of the case is contrary to other Eleventh Circuit opinions and rulings by the United States Supreme Court.

In today's opinion, the appellate court agreed with the lower court's finding that the U.S. federal court lacked jurisdiction over property recovered by Odyssey from the Atlantic Ocean in 2007. The opinion concluded that the recovery was that of the sovereign immune shipwreck Nuestra Senora de las Mercedes, a Spanish vessel that perished in 1804, even though Spain's attorney admitted to the Eleventh Circuit panel that the majority of the coins aboard were not owned by Spain at the time of the sinking. Because no vessel was found or recovered at the site and identification was not certain, Odyssey code named the site "Black Swan." Odyssey argued that even if the recovered cargo had originated from the Mercedes, that vessel was primarily on a commercial voyage when it sank, and therefore should not be considered as a "warship" having immunity from the jurisdiction of the court. Judge Black, writing for the Eleventh Circuit, concluded that the Foreign Sovereign Immunities Act (FSIA) applied in the case because, "The shipwreck of the Mercedes is thus unquestionably the property of Spain." In an apparent contradiction however, the opinion also states, "We do not hold the recovered res is ultimately Spanish property."

Odyssey had also argued that sovereign immunity should not apply because Spain did not have possession of the recovered property, citing several cases requiring possession in similar admiralty cases, but the Court ruled that the FSIA does not require possession in order for a foreign country to claim immunity over its sunken warships. The appellate court also affirmed the trial court's order which directed Odyssey to return the property to Spain, but according to the district court's ruling, this order is stayed until the appeals process is complete.

"We are certainly disappointed by the Eleventh Circuit's ruling," said Melinda MacConnel, Odyssey's Vice President and General Counsel. "We believe the U.S. Constitution and all other applicable laws give jurisdiction to the U.S. courts to determine the rights of Odyssey, Spain and all other claimants in this case. Furthermore, we believe this ruling contradicts other Eleventh Circuit and Supreme Court opinions."

"While we were surprised by the ruling and are obviously not pleased with the opinion, there is no near-term economic impact on the company and our day-to-day business operations," stated Mark Gordon, Odyssey President and COO. "Since the original adverse ruling in the 'Black Swan' case, we have developed numerous shipwreck projects and opportunities to move the company forward. We have been successful in working with other governments on shipwreck projects that determine a salvage award in advance and we've had some very promising results on several recent projects which we expect to confirm very soon."