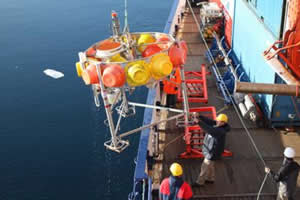 This is a so-called deep sea lander after recovery on board of Polarstern. Credit: Werner Heine, Reederei Laeisz 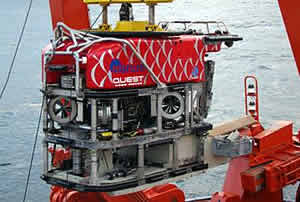 The ROV MARUM-QUEST can operate in depths down to 4000 meters below sea level. Credit: Dirk Olonscheck, Alfred Wegener Institute

BREMEN, Germany -- Three research institutes from the German federal state Bremen among others have set up an observation ward for the long-term observation of a mud volcano in the Norwegian deep sea. This took place during RV Polarstern's 24th Arctic expedition from July 10th until August 3rd.

The endeavours are part of the project ESONET (European Seas Observatory NETwork), funded by the European Union. Its purposes are to provide information about the dynamics of gas eruptions in the next years and to show the consequences of these eruptions, for example on the biological communities on the seafloor. Another investigation area was the deep sea ecosystem west of Spitsbergen, the so-called "Hausgarten" of the Alfred Wegener Institute for Polar and Marine Research in the Helmholtz Association. 50 researchers from seven nations participated in the research activities on board of Polarstern.

The Fram Strait between eastern Greenland and Spitsbergen is the only deep sea connection between the North Atlantic and the central Arctic Ocean. The Hausgarten is situated here and the Alfred Wegener Institute is conducting long-term observations at this observatory since 1999. The observatory consists of 16 separate stations from 1.000 to 5.500 m depth.

The researchers are able to discern considerable changes after a decade of systematic research. The water temperature in 2.500 m depth has increased by a tenth degree Celsius, for example. There is first evidence that the oxygen saturation has decreased at the boundary layer between seafloor and water and that the composition of the animal community has changed quicker than expected.

"Whether we really observe consequences of rapid change in the Arctic in several thousand metres of water depth, or if we are witnesses to natural changes taking place over several decades will be seen after the analysis of our data and further research", says Dr. Michael Klages, biologist at the Alfred Wegener Institute and scientific head of the expedition.

The research schedule at the AWI Hausgarten further contributes to other projects funded by the European Union: for example, work in shallower sea areas has been carried out in coordination with Norwegian Institutes in the framework of a project financed by the company StatoilHydro.

The construction of the long-term observatory LOOME (Long Term Observation of Mud Volcano Eruptions) was another focus of the expedition. The target of the observatory is to better understand the Hakon Mosby mud volcano situated at the Norwegian continental shelf in regard to the processes happening inside. The mud volcano has a diameter of about 1.5 km and it lies in 1.250 m water depth in the southwestern Barent Sea.

Mud, gases and water are pressed from the centre of the active mud volcano from a depth of about three kilometres to the surface of the seafloor. The efflux decreases in the direction of the outer areas of this structure. This is the spot where methane gas hydrates can be found on the floor which help to stabilize this zone.

Earlier research conducted by the Alfred Wegener Institute, the Max Planck Institute for Marine Microbiology and the French Institute IFREMER show that the efflux controls the distribution of biological communities and the stability of the gas hydrates as well as their release. With the construction of the long-term observatory it is possible to examine the mud volcano in regard to sudden gas eruptions and possible effects on the gas hydrate system, the composition of the soil and the organisms living at the fringe of the mud volcano.

"The distribution of the long-term observatory is an important milestone of the project ESONET", explains Dr. Dirk DeBeer, coordinator of the project from the Max Planck Institute for Marine Microbiology in Bremen. "It was possible to install the complicated construction of the observatory as planned with the help of all partners from Germany, France and Norway involved in the project. It shows again that good collaboration of the involved institutes is an important component of European marine research", DeBeer continues.

The availability of a remote-controlled submarine vehicle, a so-called ROV (Remotely Operated Vehicle), was essential for the scientific work in the investigation area. The deep sea robot QUEST from the Center for Marine Environmental Research (Marum) of the University Bremen was therefore on board of Polarstern for the second time after 2007.

"This journey posed the highest scientific-technical demands on the ROV and my team", explains Dr. Volker Ratmeyer, head of QUEST at Marum. "I think that we were able to show with our expedition that it is possible to work on tasks of this difficulty in Germany as well, like the installation of a deep sea observatory or the retrieval of heavy equipment", Ratmeyer continues.

Klages adds: "It is impressive to see the level of competence that has grown together during the last years between Bremerhaven and Bremen. It is also impressive to see what we are able to achieve in deep sea research if we bring our excellent infrastructures jointly into such projects."