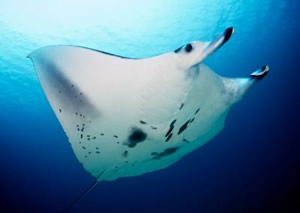 Manta rays are more likely to gather together under either a new or a full moon, according to new research published Oct 3 in the open access journal PLOS ONE by Fabrice Jaine and colleagues at the University of Queensland.

The research identifies environmental factors that predict the abundance and behavior of manta rays at Lady Elliott Island in the Great Barrier Reef. The authors comment that knowing these factors is important for conservation efforts, "especially in the context of a changing climate and with targeted fisheries increasingly threatening manta ray populations in various parts of the world."

Enlisting the help of volunteer SCUBA divers and tour operators on the island for a 'citizen science' approach, the authors monitored the relative abundance of manta rays indulging in three types of behavior: foraging for food, cleaning by smaller fish and cruising, and correlated these with various environmental factors.

Their results show that manta rays visit specific sites around the island for specific activities. Aside from cleaning at dedicated 'cleaning stations', known to be an important activity for manta rays, foraging was the predominant activity at 5 of the 7 sites surveyed, and was the only activity during which large groups of 80 or more rays clustered together. At other sites, rays were more likely to indulge in cleaning or cruising behaviors in addition to foraging. The overall number of manta rays at the island was higher in autumn and winter, around the new and full moon, and when wind speeds were lower, according to the study.

The authors suggest that these results could be applied to understand the distribution of manta ray populations around the world, and could be extended to other large species for which citizen scientists can be relied on to observe and gather data.