Flap Over Fishes in Deciding Who's the Smallest of Them All; 'Would that be Length, Volume or Weight'

Scientists Detail 'Longest Flow Of Sand And Mud Yet'; Volume 'difficult To Comprehend'

DUI Recalls Weight And Trim Systems Due To Drowning Risks 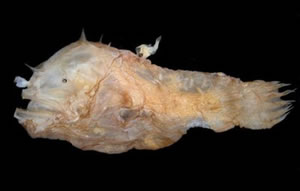 world's smallest fish, a 6.2 mm long male Photocorynus spiniceps, fused to the back of a female

SEATTLE, Washington -- The authors of a paper in this week's Proceedings of the Royal Society of London Section B, who say their 7.9 mm-long fish from a peat swamp in Southeast Asia is the smallest fish and vertebrate known, have failed to make note of work published last fall that describes sexually mature, male anglerfishes measuring 6.2 mm to 7.4 mm in length.

The 6.2 mm specimen is by far the smallest of any vertebrate, beating the recent claim by a full 1.7 mm, according to Ted Pietsch, a University of Washington professor of aquatic and fisheries sciences, who has described the specimen.

Pietsch includes information about the tiny specimen, collected in the Philippines, in a review of what's known about reproduction in anglerfishes, so called because they have bioluminescent lures growing from their heads that they wave or cause to blink in order to attract prey to their mouths. The work appeared in the September issue of Ichthyological Research, published by the Ichthyological Society of Japan.

In the "Summary and Conclusions" section of that paper, Pietsch wrote of specimens of Photocorynus spiniceps, the smallest of which was 6.2 mm. Pietsch has the histological evidence that it is a mature male.

The male is attached to the middle of the back of a 46 mm long female Photocorynus spiniceps because that is how they mate.

It's called sexual parasitism and in five of the 11 families of anglerfishes, the males are tiny compared to the females and fuse for life to their mates by biting onto the sides, backs or bellies of a female. An attached male -- even two, three or up to eight, depending on the family -- essentially turns the female into a hermaphrodite, providing her body with everything she needs to reproduce. For the task, the 6.2 mm male, for instance, has testes so huge they nearly fill his entire body cavity, crowding his other internal organs.

The female takes care of swimming, eating -- everything.

Anglerfishes live in deep water off both U.S. coasts and across the world's oceans. Home includes some of the most desolate stretches of the seafloor on Earth. Scientists estimate that 80 percent of the females, many of which live 25 or 30 years, never encounter a male. So it makes sense that anglerfish have evolved this strategy for reproducing, Pietsch says.

The sexually parasitic males don't have the lures typical of males of non-parasitic anglerfishes, instead their tiny bodies are dominated by nostrils -- to detect females -- and large eyes to scrutinize the female's lure. The male makes certain the female is of his family before biting onto her.

The specimen Pietsch describes is borrowed from the vertebrate collection of the Scripps Institution of Oceanography and his anglerfishes research is funded by the National Science Foundation. Along with including information in his published work, Pietsch's findings about the specimen were presented and illustrated at the Seventh Indo-Pacific Fish Conference in Taiwan last May.

"There are always difficulties in talking about the smallest -- would that be length, volume or weight -- the debate goes round and round," Pietsch says. The co-authors of the paper in the Proceedings of the Royal Society of London Section B, two of whom Pietsch knows, call the fish they found "the world's smallest vertebrate" and compare lengths.

They also compare numbers of vertebrae. On that count, Pietsch's Photocorynus spiniceps scores an 18 and Paedocypris progenetica, the subject of this week's paper, scores 33 to 35.