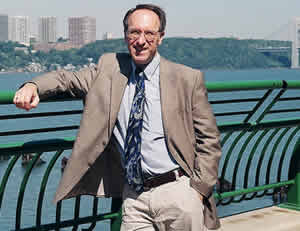 NEW YORK, New York -- Multiple environmental stressors, such as agricultural runoff, pollution and invasive species, threaten rivers that serve 80 percent of the world's population, around 5 billion people, according to researchers from The City College (CCNY) of The City University of New York (CUNY), University of Wisconsin and seven other institutions. These same stressors endanger the biodiversity of 65 percent of the world's river habitats and put thousands of aquatic wildlife species at risk.

The findings, reported in the September 30 issue of "Nature," come from the first global-scale initiative to quantify the impact of these stressors on humans and riverine biodiversity. The research team produced a series of maps documenting the impact using a computer-based framework they developed.

"We can no longer look at human water security and biodiversity threats independently," said the corresponding author, Dr. Charles J. VÃ¶rÃ¶smarty, director of the CUNY Environmental Crossroads Initiative and professor of civil engineering in The Grove School of Engineering at CCNY. "We need to link the two. The systematic framework we've created allows us to look at the human and biodiversity domains on an equal playing field." The framework offers a tool for prioritizing policy and management responses to a global water crisis.

Understanding and responding to the myriad threats to water security requires new methods to make diagnoses and to act on these findings. "As is the case with preventive medicine, our study demonstrates that diagnosing and then limiting threats at their local source, rather than through costly remedies and rehabilitation, is a more effective and sensible approach to assure global water security for both humans and aquatic biodiversity, " notes Professor VÃ¶rÃ¶smarty.

"We've integrated maps of 23 different stressors and merged them into a single index," said study co-leader Dr. Peter McIntyre, assistant professor of zoology, University of Wisconsin. "In the past, policymakers and researchers have been plagued by dealing with one problem at a time. A richer and more meaningful picture emerges when all threats are considered simultaneously."

Among the stressors analyzed were the effects of pollution, dams and reservoirs, water overuse, agricultural runoff, loss of wetlands and introduction of invasive species. The authors said their findings are "conservative," since there is insufficient information to account for additional stressors like pharmaceutical compounds and mining wastes.

High incident threat levels to human water security were found in developed and developing nations around the world. Affected areas include much of the United States, virtually all of Europe and large portions of Central Asia, the Middle East, the Indian subcontinent and eastern China.

"We uncovered a broad management principal operating at the global scale," Professor VÃ¶rÃ¶smarty said. "In the industrialized world, we tend to compromise our surface waters and then try to fix problems by throwing trillions of dollars at the issues. We can afford to do that in rich countries, but poor countries can't afford to do it."

The researchers noted that causes of degradation of many of the developing world's most threatened rivers bear striking similarities to those of rivers in similar condition in wealthy countries. However, going down the path of instituting highly engineered solutions practiced traditionally by industrialized nations, which emphasize treatment of the symptoms rather than protection of resources, may prove too costly for poorer countries.

There are many more cost-effective solutions, they point out. For example, engineers can re-work dam operating rules to achieve economic benefits while simultaneously providing water releases downstream that preserve habitat and biodiversity.

With the high price tag for bringing water quality and supply in the developing countries to levels found in industrialized economies, Professor VÃ¶rÃ¶smarty argues that a more economical approach is called for. A strategy called integrated water resource management, which balances the needs of humans and nature, would best meet the dual challenges of establishing human water security and preserving biodiversity in the developing world.

It would be more cost effective, he contends, to ensure that river systems are not impaired in the first place. This could be accomplished through better land use management, better irrigation techniques and emphasis on protecting ecosystems. Healthy ecosystems provide many valuable, and free, services to society by providing clean water, flood control, and food supplies. The value of such freshwater services is in the trillions of dollars per year.

One of the project's goals is to support international protocols to be used for water system protection since rivers maintain unique biotic resources and provide critical water supplies to people. An international approach is critical since more than 250 river basins cross international borders.

"It is absolutely essential to have information and tools that can be shared across nations," Professor VÃ¶rÃ¶smarty stressed. "Our knowledge of these systems is progressively worsening as nations fail to invest in basic monitoring, true for both water quantity and quality. How can we craft protocols on biodiversity protection and human water security without good information?

"Monitoring the world's fresh water would yield huge returns in terms of avoiding costly conflicts, providing food security, preserving unique life forms and a host of other valuable benefits. These benefits would cost pennies on the dollar."

The work was executed under the aegis and support of two elements of the Earth System Science Partnership (ESSP), which studies numerous aspects of global change science: the Global Water System Project (headquartered in Bonn) and the freshwater BIODIVERSITY project of DIVERSITAS, the International Programme of Biodiversity Science (Paris).

The CUNY Environmental Crossroads Initiative is a core component of the CUNY Advanced Science Research Center (ASRC), which facilitates high-end research by CUNY faculty in five key and emerging scientific disciplines. It will be based in a 200,000 square-foot facility now under construction on CCNY's South Campus.