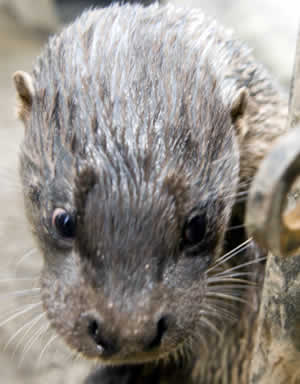 Dara, the world's only captive hairy-nosed otter, is one of the rarest of otter species. credit: Sterling Zumbrunn 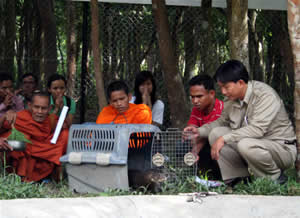 PHNOM PENH, Cambodia -- The world's only known hairy-nosed otter in captivity, one of the rarest and little known of otter species, got a new home and a Buddhist blessing today.

Dara, a frisky young male rescued when his mother was killed by a fisherman, was released into a large new enclosure built for him at Phnom Tamau Zoological Garden and Rescue Centre, located near Phnom Penh. The release was celebrated with a blessing by Buddhist monks, a Cambodian tradition when a family moves into a new residence. Dara, which in the Khmer language means "star" or "precious" was brought to the wildlife center in December. He had been living in a small cage since his capture.

The natural habitat for this rare species in Cambodia is the seasonally flooded forests surrounding the Tonle Sap Great Lake. Conservation International (CI) and Cambodia's Fishery Administration are working together to extend the Kampong Prak fish sanctuary at Tonle Sap Lake up to 20,000 hectares to include vital otter habitat. The expansion includes large areas of flooded forests where at least two species of rare otters are known to exist, the hairy-nosed otter (Lutra sumatrana), and the smooth-coated otter (Lutragale perspicillata).

Due to factors such as civil war and poor infrastructure, Cambodia has retained vast areas of forest and wetlands, and almost 25 percent of the entire country is managed primarily for conservation. In neighboring countries, these natural habitats and their wildlife have been lost due to logging or agriculture. Cambodia is now a stronghold for many rare species that have been driven to extinction elsewhere in Southeast Asia.

Thought to be extinct in the 1990s, the hairy-nosed otter is known to survive only in a few regions of Cambodia, Thailand, Vietnam and Sumatra. Otters in Asia are increasingly threatened by the illegal international fur trade. They are also captured for pets or killed for use in traditional medicines. Another growing threat is loss of habitat, due in part to impacts from global climate change.

"Climate change may well lead to changes in flow regimes from the Mekong, along with the many hydro dams on the Mekong that that would mean the otter's habitat the flooded forests would be mostly lost. This means the species would either be lost or we need a protected area to support it. We are doing just that with this freshwater sanctuary," said David Emmett, CI's regional director in Cambodia.

"Scientists recommend establishment of a breeding population in captivity to ensure survival of this species," explained Annette Olsson, CI's research and monitoring manager in Cambodia. "Dara could be the founder of such a captive population, if and when we find him a wife, of course."

CI has several activities at Tonle Sap to protect the otters there, including research and monitoring, training of local law enforcement rangers, education and awareness for local communities and schools, and discussion groups with local fishing communities to address human-otter conflicts.

In the Tonle Sap region, otters are often killed by poor fishermen who consider them pests because otters sometimes break their fishing nets and traps and steal their catch. At the same time, fisherman can sell the furs to dealers, who frequently will provide wildlife traps to the fisherman.

CI scientists have been researching otters in Cambodia since 2006, and Olsson is leading the 2008 review of the hairy-nosed otter for the IUCN Red List of Threatened Species. Currently, the listing status is Data Deficient, but Olsson said that will very likely be changed to a higher category of threat following the 2008 review.

The IUCN Otter Specialist Group considers this otter species to be the world's rarest, and all evidence currently indicates that it will be in a highly threatened category. The new listing status will make this species a higher priority for protection and conservation funding.