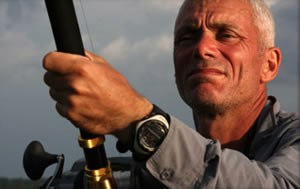 Riding the wave of the Internet sensation and book re-release, the debut of the special A LION CALLED CHRISTIAN that same evening, also scored significant gains compared to year-ago timeslot among households (706K, +66%) and P25-54 (457K, +155%). Online, RIVER MONSTERS and A LION CALLED CHRISTIAN also drove success for Animalplanet.com, which brought in 153,046 unique visitors on Sunday -- its second- highest levels in the past year.

“The new content on Animal Planet is hitting its stride,” says Marjorie Kaplan, president and general manager of Animal Planet Media. “RIVER MONSTERS is such edge-of-your-seat television and presents a frightening, gripping and ultimately heart-wrenching story. It’s no surprise it connected with viewers on a visceral level, especially with Jeremy as their adventure guide.”

RIVER MONSTERS travels worldwide with host, biologist and extreme angler Jeremy Wade to solve freshwater mysteries, debunk these myths and track down these harrowing tales. Wade has made his life’s passion and career searching for a variety of aquatic vertebrae while navigating the globe’s waterways. Each Sunday, he comes face-to-face with fear and trying to understand these mysterious predators with a taste for human flesh, putting his life on the line to find truly monster-sized fish while globetrotting through Germany, Australia, Brazil and even the state of Texas. His weekly quest catapults him in search of such fascinating creatures as piranha, alligator gar, wels catfish, bullshark, piraiba/candiru, and arapaima, all supposedly deadly creatures shrouded with mystery -- especially their feeding habits.