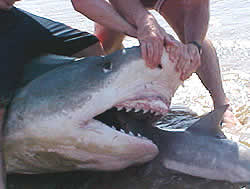 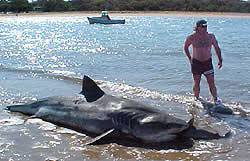 Mystery still surrounds the tiger shark. Fortunately, this one doesn't appear to have eaten anything more interesting that the smaller shark protruding from its mouth.

But tiger sharks, the garbage guts of the ocean, have been found with handbags, rolls of linoleum, and even bits of people in their insides.

Marine biologist Julian Pepperell is applying for a federal government grant to tag tiger sharks, so their progress through the oceans can be tracked by researchers.

"Their movements are what we're really interested in," Julian explains.

"They appear off New South Wales in summer, for example, and then they completely disappear in winter.

"They're also a common resident up off northern Queensland, although when I say 'resident', they also disappear in winter.

Dr Pepperell says little is known about the size of Australia's tiger shark population, or where they go when they leave Australian waters.

The tiger is a relatively widespread shark found in the waters of Australia, Fiji, New Caledonia, New Guinea and other Pacific islands.

But researchers don't know if each area has its own population of sharks, or whether the same fish go a grand tour of the Pacific every year.

"Do they move freely between those locations, or not?" Dr Pepperell asks.

"Are we talking about fairly small populations, in which case should we be concerned over mortalities caused by protective beach meshing or drumline captures?"

Tiger sharks are probably the closest thing to the garbage disposal units of the ocean.

For the layman, though, perhaps the first question is - what about the smaller shark in this beast's mouth?

Is there no honour in the ocean?

"Tiger sharks are probably the closest thing to the garbage disposal units of the ocean," Julian explains, "They eat just about anything.

"In fact they really do like eating smaller sharks and stingrays.

"They're the only shark that eats turtles, because their teeth can actually saw through the carapace.

Dr Pepperell says tiger sharks are also known to ingest all manner of things found floating in the coean - including whole rolls of linoleum, nuts, bolts and copper wire.

If they find something not to their taste, like many other sharks they can regurgitate foreign items - but there doesn't seem to be much a tiger shark can't stomach.

"There was a classic description from many years ago from Port Jackson in Sydney of a shark that had in its stomach a woman's handbag, in which was a comb, a pencil, a powderpuff and a wristwatch which was still going."

But how long would something like that stay in the shark's stomach, before it was either destroyed by digestive acids or expelled?

Dr Pepperell cites an example of a tiger shark kept in Sydney's Taronga Park Zoo in the 1930s:

"It had only been fed on horsemeat during its one month in captivity, but after it died and was disected, in its stomach were two intact dolphin fish [not dolphins, a type of fish also known as Mahi Mahi] which had gone undigested.

In another chilling example from the same era, a shark kept in captivity for several months one day regurgitated a human arm, complete with tattoo.

The fishermen who landed this recent example off Tannum Beach may have got off very lightly.

You can also find out more about this particular tiger shark encounter, and how it came to be caught off Tannum Beach.