Scientists Receive Signals From The Atlantic Salmon Highway; 'Helps Us Fill In A Big Gap' 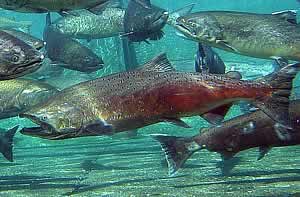 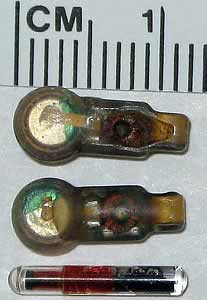 RICHLAND, Washington -- A new acoustic telemetry system tracks the migration of juvenile salmon using one-tenth as many fish as comparable methods, suggests a paper published in the January edition of the American Fisheries Society journal Fisheries. The paper also explains how the system is best suited for deep, fast-moving rivers and can detect fish movement in more places than other tracking methods.

The Juvenile Salmon Acoustic Telemetry System (JSATS) estimated the survival of young, ocean-bound salmon more precisely than the widely used Passive Integrated Transponder (PIT) tags during a 2008 study on the Columbia and Snake rivers, according to the results of a case study discussed in the paper. The paper also concludes that fish behavior is affected least by light-weight JSATS tags compared to larger acoustic tags.

"Fisheries managers and researchers have many technologies to choose from when they study fish migration and survival," said lead author Geoff McMichael of the Department of Energy's Pacific Northwest National Laboratory.

"JSATS was specifically designed to understand juvenile salmon passage and survival through the swift currents and noisy hydroelectric dams on the Columbia River," McMichael continued. "But other systems might work better in different circumstances. This paper demonstrates JSATS' strengths and helps researchers weigh the pros and cons of the different fish tracking methods available today."

Scientists at PNNL and the U.S. Army Corps of Engineers' Portland District co-authored the paper. PNNL and NOAA Fisheries began developing JSATS for the Corps in 2001.

JSATS is an acoustic telemetry system that includes the smallest available acoustic transmitting tag, which weighs 0.43 grams. Its battery-powered tags are surgically implanted into juvenile salmon and send a uniquely coded signal every few seconds. Receivers are strategically placed in waterways to record the signal and track when and where tagged fish travel. A computer system also calculates the precise 3-D position of tagged fish using data gathered by the receivers.

PIT tags are also implanted into juvenile salmon for migration and survival studies, but don't use batteries to actively transmit signals. Instead, PIT tags send signals when they become energized while passing by PIT transceiver antennas.

For the paper's case study, researchers implanted 4,140 juvenile Chinook salmon with both JSATS and PIT tags. They also placed just PIT tags inside another 48,433 juveniles. All of the case study's tagged fish were released downstream of Lower Granite Dam on the Snake River in April and May 2008.

Having flexibility in where receivers can be placed is advantageous, the authors reported. JSATS receivers can be located in both rivers and dams, while PIT antennas usually can only go inside fish bypasses at dams. Researchers can estimate fish survival for an entire river system when receivers are placed in more locations, the paper explains.

The team also compared JSATS' technical features with those of another acoustic telemetry system, the VEMCO system being used for the Pacific Ocean Shelf Tracking (POST) project along North America's West Coast. The VEMCO system is best suited for use in the slow-moving, open ocean when observing small numbers of large fish, the authors wrote. In contrast, JSATS was developed to study the migration of larger quantities of small juvenile fish in fast-moving rivers.

A key difference between the JSATS and VEMCO systems is dry tag weight. JSATS tags weigh 0.43 grams and are the smallest acoustic tags available. VEMCO tags that have been used in Columbia River juvenile salmon weighed 3.1 grams. Previous research shows fish can bear a tag that weighs up to 6.7 percent of their body weight without significant adverse survival effects. That means JSATS tags can be implanted into fish as light as 6.5 grams, while VEMCO tags should be used in fish that weigh no less than 46.3 grams.

Another advantage of JSATS is that it is non-proprietary and available for anyone to manufacture or use. Because several companies have been able to competitively bid for the opportunity to produce the system's components, its cost has dropped in recent years. JSATS tags, for example, have gone from $300 per tag in 2005 to $215 in 2008. And JSATS tags cost $40 to $135 less than other commercially available acoustic tags in 2008. Proprietary interests have hindered the development of acoustic telemetry equipment in certain areas, the team wrote.

"JSATS has helped us get a clearer, more complete picture of how salmon migrate and survive through the Columbia and Snake rivers to the Pacific Ocean," McMichael said. "But we're continuing to develop JSATS and hope others will find it useful in studies of other aquatic animals. There's an opportunity for all aquatic telemetry technologies to be improved."