Scientists: Fish Use The Threat Of Punishment To Deter Mating 'Queue Jumpers' 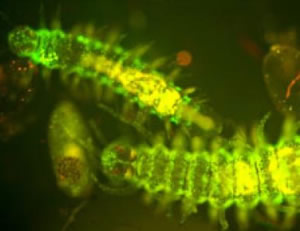 SAN DIEGO, California -- Many longtime sailors have been mesmerized by the dazzling displays of green light often seen below the ocean surface in tropical seas. Now researchers at Scripps Institution of Oceanography at UC San Diego have uncovered key clues about the bioluminescent worms that produce the green glow and the biological mechanisms behind their light production.

Marine fireworms use bioluminescence to attract suitors in an undersea mating ritual. Research conducted by Scripps marine biologists Dimitri Deheyn and Michael Latz reveals that the worms also may use the light as a defensive measure. The report, published as the cover story of the current issue of the journal Invertebrate Biology, provides insights into the function of fireworm bioluminescence and moves scientists closer to identifying the molecular basis of the light.

"This is another step toward understanding the biology of the bioluminescence in fireworms, and it also brings us closer to isolating the protein that produces the light," said Deheyn, a scientist in the Marine Biology Research Division at Scripps. "If we understand how it is possible to keep light so stable for such a long time, it would provide opportunities to use that protein or reaction in biomedical, bioengineering and other fields—the same way other proteins have been used."

The precisely timed bioluminescent displays have been tracked like clockwork in Southern California, the Caribbean and Japan, peaking one to two days before each quarter moon phase, 30 to 40 minutes after sunset and lasting approximately 20 to 30 minutes.

Deheyn and Latz collected hundreds of specimens from San Diego's Mission Bay for their study, allowing them to not only examine live organisms but also produce the fireworms' luminous mucus for the first time in an experimental setting. The achievement provided a unique perspective and framework for examining the biology behind the worm's bioluminescent system.

A central finding described in the Invertebrate Biology paper is that the fireworms' bioluminescent light appears to play a role beyond attracting mates. The researchers found that juveniles produce bioluminescence as flashes, leading to a determination that the light also may serve as a defensive mechanism, intended to distract predators.

Through experiments that included hot and cold testing and oxygen depletion studies, Deheyn and Latz found that the bioluminescence is active in temperatures as low as minus 20 degrees Celsius (minus 4 degrees Fahrenheit). Higher temperatures, however, caused the bioluminescence to decay rapidly. The light also proved resilient in settings of low oxygen levels.

Based on these tests, the researchers believe the chemical process responsible for the bioluminescence may involve a specific light-producing protein—also called a "photoprotein." Further identification and isolation will be pursued in future studies.

"We were inspired by the work of earlier researchers who had studied the chemistry of fireworm bioluminescence, including Osamu Shimomura, one of the winners of the 2008 Nobel Prize in Chemistry for his discovery of green fluorescent protein from the jellyfish luminescent system," said Latz. "This new study showed that the fireworm bioluminescence also involves green fluorescence, originating from the oxidation product of the luminescent reaction."