'Lucky Luke' Of The Seas: How Ambush-feeding Zooplankton Capture Prey 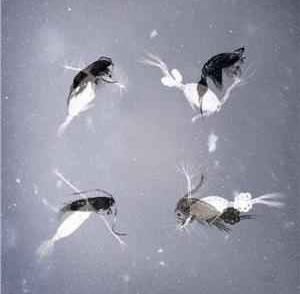 Oithona attacking prey. The position of the copepod before the jump is marked with white and after the jump with black. Photo: DTU Aqua

COPENHAGEN, Denmark -- Could you filter 100,000 cubic metres of syrup every day to find food in a concentration of two grains of rice per cubic metre?

This is what zooplankters, such as copepods, do every day, gathering microscopic food particles (algae etc.) from a volume of water approx. one million times their own body volume to survive. It is no trivial task as water – at copepod scale – has the consistency of syrup. On top of which, copepods are blind.

The question is how they do it? Knowing this is necessary to understand the mechanisms at play in the food chains in the sea on which the fish on our supper table ultimately depend.

“The challenge for the copepod is that a small body moving through water will pull a thick layer of syrup-like water with it. So how do you get to the prey, if it is being pushed away as you move in?” asks Professor Thomas KiÃ¸rboe, National Institute of Aquatic Resources, Technical University of Denmark (DTU Aqua), who, together with colleagues from DTU Aqua and DTU Physics, has been studying the prey capture techniques of two ambush-feeding species of copepods by means of high-speed video, a great deal of patience and a fraction of luck.

The results are published in the scientific journal Proceedings of the National Academy of Science (PNAS).

“So far, we know of four ways in which zooplankters tackle the engineering feat of finding food in water which appears as thick as syrup. Our contribution has been to describe the mechanism at work for the last of these: How some copepods perform spectacularly precise and rapid surprise attacks on their single-cell prey after first having registered the prey by means of hydrodynamic signals,” explains Professor Thomas KiÃ¸rboe, DTU Aqua.

The solution for the ambush-feeding copepods builds on what Thomas KiÃ¸rboe calls the Lucky Luke effect:

“Our recordings show that the sub-mm copepods accelerate to a speed of 100 mm per second in a few milliseconds, while at the same time rotating perhaps 180 degrees. Like Lucky Luke who is faster than his shadow, the copepods jump forward so rapidly and with such precision that they, so to speak, shake the viscous boundary layer off, in that way getting close enough to their prey to capture it with their feeding limbs.”

The viscous boundary layer is the layer of water which the copepods pull with them when moving their bodies through the syrupy water. The larger the animals are and the faster they swim, the thinner it seems.

Ambush feeding, whereby feeders passively wait for their prey and capture it by means of rapid surprise attacks, has many advantages over a technique where they swim around looking for prey.

“Lying still, you expend less energy and also minimise the risk of being spotted and eaten by other predators. An ambush specialist such as Oithonatherefore has a low metabolic rate and far lower mortality rates than other copepods of the same size pursuing more active feeding strategies,” says the DTU Aqua professor.

So the question is, of course, why don’t all zooplankters avail themselves of these apparently superior tactics?

“To capture prey through surprise attacks you must be streamlined and have enough raw muscle power to move extremely fast through water. At the same time, pinpointing the prey before jumping requires highly developed sensing capabilities. Surprise attacks are therefore not the most widespread prey capture technique among small animals,” concludes Thomas KiÃ¸rboe.

Thomas KiÃ¸rboe happily admits that, to outsiders, studying the prey capture techniques of copepods may seem slightly nerdish. However, it provides knowledge which is essential to understanding important strategies and mechanisms in the marine food chains.

“We are developing so-called trait-based models, describing properties, or traits, of individuals rather than species, e.g. various feeding strategies. By understanding the mechanisms at play in the individual interaction, we can extrapolate to other species and situations, e.g. describing all zooplankters on the basis of five properties, rather than conducting detailed studies of each and every individual species in order to model and understand the food chains and their development under different conditions.”

The project on ambush-feeding copepods has involved scientists from DTU Aqua and DTU Physics. As part of the results, the scientists have, for the first time ever, been able to film and study the techniques of the attacking copepods.

“Previous studies of the prey capture techniques in copepods that feed by creating a scanning flow so that the food passes past their mouths have been conducted by attaching the copepod to a hair to hold it in position in front of the camera lens. It goes without saying that this is not possible when studying how they jump. As the camera can hold only 1 second of recordings when recording 2,000 pictures a second, you have to film at the precise second, in the right place. It has taken a great deal of patience, not to mention a fair bit of luck, which is probably why it has never been done before,” muses Thomas KiÃ¸rboe, DTU Aqua.