Research: Entire Dolphin Families Being Wiped Out By Fishing Nets 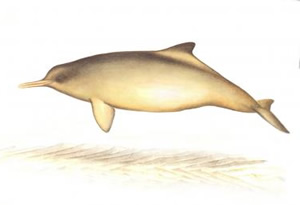 The franciscana, Pontoporia blainvillei, lives in the Atlantic coast off of Argentina where it is often entangled in fishing nets. Graham Harris/WCW

NEW YORK, New York -- Dolphins along coast of Argentina could experience a significant loss of genetic diversity because some of the animals that accidentally die when tangled in fishing nets are related. According to a new genetic analysis published this week in the journal PLoS One, Franciscana dolphins that die as by-catch are more than a collection of random individuals: many are most likely mother-offspring pairs. This result, which suggests reduced genetic diversity and reproductive potential, could have significant implications for the conservation of small marine mammals.

"It has always been assumed that dolphins could be entangled in fishing nets with family members, but this is one of the very few analyses to demonstrate this result," says Martin Mendez, a postdoctoral researcher at the Sackler Institute for Comparative Genomics at the American Museum of Natural History who led the study. "When family members die as by-catch, a portion of genetic identity of a species is lost, and two important demographic elements of a population are removed: a reproductive female and the next generation."

Franciscana dolphins (Pontoporia blainvillei) have a range that hugs the Atlantic coast of Brazil, Uruguay, and Argentina. This species is one of the world's smallest cetaceans and is a member of the river dolphin family, although it actually lives in coastal waters and estuaries. Females probably begin to have calves between two and five years and probably stay with each calf for some time. Because researchers estimate that between two and five percent of the Fransiscana population near Argentina becomes entangled in fishing nets from small-scale operations each year, the by-catch death rate has a significant impact on the population numbers. By-catch is the biggest impact to small cetacean populations world-wide.

"The by-catch in lost Franciscana dolphins is comparable to what the population produces in terms of offspring," says Pablo Bordino of FundaciÃ³n Aquamarina in Buenos Aires, Argentina. "To know that Franciscana family groups are being caught in certain areas allows us to focus our conservation strategies to try to avoid this serious impact. The use of genetic information also gives us a new window into the ecology of this species."

In the current study, Mendez, Bordino, and colleagues looked at over 250 by-catch deaths among Franciscana dolphins over 10 years and found that most of the animals entangled in groups were genetic relatives.

"Like other highly cognitive species, the Franciscana dolphin likely relies on vital bonds among related animals to survive in a challenging environment," says Howard Rosenbaum, Director of the Wildlife Conservation Society's Ocean Giants Program. "Our genetic findings confirm that these bondsâespecially between mothers and calvesâmake the Franciscana particularly vulnerable to bycatch mortality, a significant threat to the species in some areas of its range."

"People assume that by-catch is random, but there are related animals in the sample," says Mendez. "This analysis combining high-resolution genetic data would not have been possible a decade ago. We can now use these data to recover essential biological and ecological information, and translate that into management or conservation action."