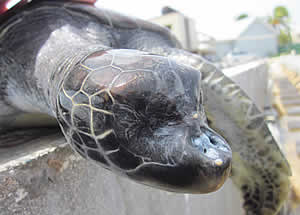 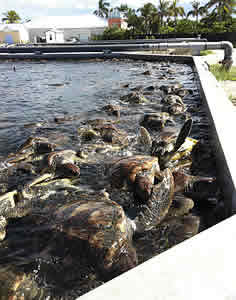 Swimming in water filled with their own waste, the turtles fight for food, bite each other and even resort to cannibalism. credit WSPA

BOSTON, Massachusetts -- A year-long undercover investigation conducted by the World Society for the Protection of Animals (WSPA) at the Cayman Turtle Farm, a popular tourist destination and the world's last remaining facility that raises sea turtles for slaughter, has revealed disturbing animal cruelty and potential human health risks.

Video footage and photographs from the farm show thousands of endangered sea turtles being kept in dirty, packed touch tanks. Swimming in water filled with their own waste, the turtles fight for food, bite each other and even resort to cannibalism. Many suffer from disease and birth defects, such as injured fins or missing eyes.

"Life on the Cayman Turtle Farm is a far contrast from how sea turtles live in the wild," said Elizabeth Hogan, Oceans and Wildlife Campaigns Manager at WSPA. "It's truly horrific to see this type of neglect and cruelty taking place at a tourist attraction. Not to mention the fact that these foul conditions aren't only affecting the resident turtles â humans could be at risk, as well."

As part of its attraction, the farm encourages visitors to touch and pick up the sea turtles. However, WSPA tested and found traces of Salmonella, E. Coli and Vibrio vulnificus in the turtle touch tank waters â meaning that visitors who touch the turtles are at risk for contracting these diseases and then possibly spreading them to fellow passengers back on board their cruise ships. According to a 2012 poll conducted by Greenberg Quinlan Rosner, 69% of cruise ship passengers who visited the Cayman Turtle Farm since 2009 were unaware of these health risks, and the majority would not have touched the sea turtles, had they known.

"The bottom line is that the farm is currently posing great threats to sea turtle welfare and human health," added Hogan. "We want to help the farm change for the better, but its unwillingness to meet us halfway is posing a great challenge."

On July 3, WSPA met with the Cayman Turtle Farm owners to discuss its investigation findings and propose a plan for the farm to transition its business to a sea turtles rehabilitation and research center. To date, the farm is not willing to change.