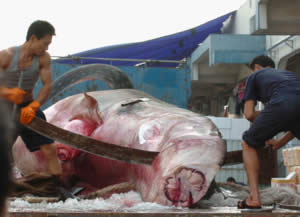 Fisherman sawing up the whale shark

After the whale shark was slaughtered, it was delivered to Zhejiang Province. There, it was sold for 85,000 yuan (USD 11,300). According to experts, such a large whale shark is rarely caught along the Fujian Coast.

According to the mainland newspaper, The Straits News report, the local fisherman who caught the whale shark was 33 year old Lin Jianhai, "This is the first time that we have seen such a big fish for so many years. Before, I had seen whale sharks weighing around 2 or 3 tons. However, we have never caught any before." Lin Jianhai said that the total income from fishing this year so far could not compare with the selling price of this large fish.

This shark is a female and its entire body is black. The fin itself measures about 1.5 meters long. Its mouth is very flat without any teeth. There are many white spots all over the body and the fins. Each lemon-shaped spot has a diameter of about 15 centimeters (6 inches). The locals call it the "money-shark."

According to the Fujian Province Natural History Museum researcher Li Shuqing, its official name is a "whale shark." The whale shark is not considered a protected fish. However, according to the Convention on International Trade in Endangered Species of Wild Fauna and Flora, the money-shark (whale shark) is classified as an international endangered species. The protection is a level two under the national animal protection regulations.

This species of shark feed mostly on plankton through a mouth filter and is considered the largest living fish.

According to experienced fisherman and seafood businessmen, the most valuable parts of the whale shark are the fin and the bones, which are used for making medicines and tonics.