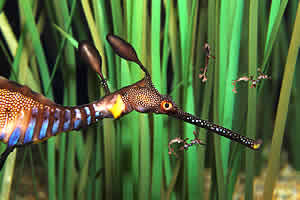 The Monterey Bay Aquarium animal care team and a nurturing weedy sea dragon dad have achieved a milestone reached by only four other aquariums in North America: the birth of a brood of sea dragon babies.

More than 80 of the inch-long fish â€" Australian relatives of the seahorse â€" began hatching on July 22. The father, who carried the eggs in a brood pouch under his tail, delivered the young in a sea dragon display that's part of the aquarium's special exhibition, "The Secret Lives of Seahorses." The last eggs hatched on August 2.

The young are being raised behind the scenes for now, said Associate Curator of Fish and Invertebrates Jonelle Verdugo, who heads the seahorse husbandry team at the aquarium. If they survive and thrive, visitors may get to see them as part of the special exhibition. Others will be transferred to colleague institutions with the Association of Zoos and Aquariums.

"We are so excited about these births," Verdugo said. "We've had success with a couple species of pipefish and half a dozen species of seahorses, but this is a first for our weedy sea dragons."

Verdugo said her team drew on the experiences of colleagues at the Aquarium of the Pacific in Long Beach, the Georgia Aquarium in Atlanta and Melbourne Aquarium in Australia, all of whom generously shared information about their own work breeding sea dragons.

Verdugo was also in touch with SeaWorld Orlando, whose sea dragon was carrying eggs and gave birth around the same time. Tennessee Aquarium in Chattanooga has also bred weedy sea dragons.

Verdugo said the papa weedy sea dragon remained on exhibit and was free to swim about as usual while he was giving birth. Each day, the young were moved behind the scenes as they hatched, and placed in smaller aquariums to receive closer attention from caregivers.

"Sea dragon pregnancies pose a lot of challenges for us," she said. "We've gotten through several of them and now have living baby sea dragons. We know there are more challenges ahead, and we hope we'll be able to raise all of the babies to adulthood."

"Just having the pregnancy and births is a great indication that we've created an environment in which our sea dragons are thriving," she added.

Like their more flamboyant cousins, the leafy sea dragons, weedy sea dragons are native to the southern and eastern coasts of Australia. While not classified as threatened in the wild, they are considered vulnerable due to over collecting for the home aquarium trade. Both species are protected under Australian law, and it is illegal to take or export them without a permit.

"If we and other aquariums continue to have success in breeding weedy sea dragons, that will go a long way toward eliminating the pressure to collect sea dragons from the wild," Verdugo said.

Leafy and weedy sea dragons are closely related to seahorses and pipefish. With all of these fishes it's the males who carry the young.

Sea dragons have long, slender bodies with leaflike projections that help them blend in with the seaweeds where they live. Weedy sea dragons can grow to be 18 inches long, and are usually reddish in color with yellow spots.

During breeding, males and females hover side by side, mirroring each other's movements but with tails curved away from each other. They rise up in the water column, just like seahorses, to transfer the eggs onto a brood patch on the underside of the male's tail.

Gestation typically lasts 6-8 weeks, and the babies hatch out over the course of a few days. In the wild, as the babies hatch, the male will change his swim pattern to distribute the young over a larger area.

The mission of the Monterey Bay Aquarium is to inspire conservation of the oceans.