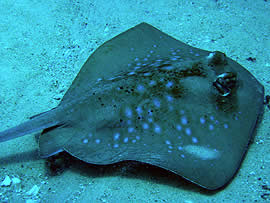 UQ researchers have shown that stingrays, once thought to be colour-blind, may be capable of seeing in colour.

They have shown that the blue-spotted maskray, a common stingray in Moreton Bay, has all the physical components necessary for colour vision.

Dr Hart said the animals were being trained to associate a coloured light with food and tested to see if they could discriminate between the training colour and a light of different colour.

He said he was unsure when these tests would be done because the Station had to be rebuilt after the fire on Friday, March 30.

He said he lost $20,000 of his equipment and about six months of research in the blaze. However, he was hopeful the experiments could be repeated in the future.

Although rays have the apparatus to see colour, the tests should confirm if they can use that colour information.

He said the blue spotted maskray was different to the bull ray that killed Crocodile Hunter Steve Irwin but it was likely that many rays had similar colour vision.

Dr Hart is also investigating whether sharks have the potential for colour vision for his ARC QEII Fellowship.

He said knowing more about ray and shark vision could eventually help in the design of wetsuits and surfboards to reduce attacks on divers, surfers and swimmers.

Professor Collin, a fish vision expert, said that the design of trawler nets could potentially be altered to reduce shark and ray catches.

Miss Theiss, who is currently studying the sensory biology and ecology of wobbegong sharks, will travel to London later this year to study the genetics of ray and shark eyes.

Susan's work has been published in the Journal of Comparative Physiology.