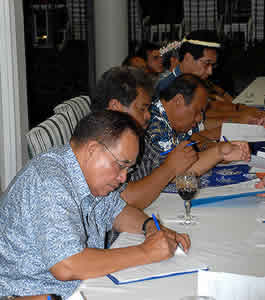 Governor Fitial of the Commonwealth of the Northern Mariana Islands in the foreground, signing the shark sanctuary resolution.

An area covering over two million square miles of the western Pacific Ocean, two-thirds of the land area of the United States, is slated to become the world's largest shark sanctuary and the first one ever created through a regional agreement among governments.

Leaders at last week's 15th Micronesian Chief Executive Summit passed a resolution (PDF) to begin the process of creating a regional sanctuary where shark fishing would be prohibited. The agreement, which also authorizes the development of a regional ban on the possession, sale and trade of shark fins, covers the waters of the Federated States of Micronesia and its four member States, The Republic of the Marshall Islands, the Republic of Palau, the Territory of Guam and the Commonwealth of the Northern Marianas Islands.

"We applaud and support the chief executives for protecting the sharks of Micronesia," said Matt Rand, director of Global Shark Conservation for the Pew Environment Group, who has worked with Micronesian leaders this year to develop the resolution and presented at the summit to push for its passage. "Their leadership should serve as a model for other coastal nations to safeguard these important keystone species which are rapidly disappearing from the world's oceans, primarily as a result of the escalating demand for shark fins in China and other Asian countries."

The Micronesian resolution is the most recent and largest example to date, of a growing realization that sharks, of which a third of all species are headed towards extinction, are in serious trouble. Last month, the Association of Pacific Island Legislatures (APIL), a body comprised of lawmakers from across the Western and Central Pacific, requested all member nations to "adopt legislation for a unified regional ban prohibiting the possession, selling, offering for sale, trading, or distribution of shark fins, rays, and ray parts."

In June and July, Honduras and the Bahamas joined Palau and the Maldives in creating shark sanctuaries. These nations have come to realize that shark tourism is far more profitable than killing the animals for their fins. One year later, the Marshall Islands instituted a shark fishing moratorium after reports of unregulated activity in its waters.

"The world must rise with us to protect our oceans and our environment," said Johnson Toribiong, President of the Republic of Palau. "That is the moral obligation of this generation for the benefit of the next."

"This is a great accomplishment for all the advocates of global and regional shark conservation," said Benigno Fitial, Governor of the Commonwealth of the Northern Mariana Islands, which along with Guam already has banned trade in shark fins. "The protection of sharks will improve our ecosystem. Now we can have balance."

The Micronesian state of Pohnpei has also taken steps to ban the possession, sale and trade of shark fins within its jurisdiction. "I am very thankful that the region has a common voice on sharks," said John Ehsa, Governor of Pohnpei. "Our State Government has pending legislation to save sharks, and I am in full support." The Pohnpei initiative is modeled after Hawaii's landmark shark fin ban which took effect July 1, 2010. That law, championed by Hawaii State Senator Clayton Hee, prohibits the sale, possession, or distribution of shark fins and fin products.

Senator Hee participated in the Micronesia summit to encourage the chief executives to continue their marine conservation efforts, particularly those focused on the protection of sharks and manta rays. "As native sons of the Pacific, the leaders of Micronesia have taken care of their mother by passing this historic resolution to save sharks," said Senator Hee.