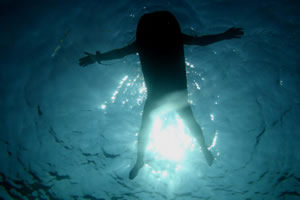 A new study says that sharks make 'exploratory' bites on surfers, not mistaking them for seals

PENSACOLA, Florida -- A new study has cast doubt on the theory that sharks mistake surfers for seals when the two are involved in an attack. The most widely known assumption for shark attacks on surfers is the mistaken identity theory that states that sharks, especially white sharks, mistake surfers for seals when looking at them from below thus biting surfers by mistake. New research shows that this theory is wrong and the sharks are not mislead by the outline of a surfer, thus understanding that the surfers are not seals. The main motivation for biting surfers is of exploratory nature.

The results are published in the latest issue of the Journal of Marine Biology, entitled Do White Shark Bites on Surfers Reflect Their Attack Strategies on Pinnipeds

The two shark biologists Dr. Erich Ritter, University of West Florida, and Alexandra Quester, University of Vienna, showed that white sharks do not mistake surfers for seals but primarily grab and bite a surfer or the board to further examine what the surfer or object could be.

Close to 70 incidents from the Western US coast of California and Oregon that occurred between 1966 and 2015 were evaluated, primarily focusing on the determination of the involved shark's length, as well as the level of damage done to the surfer and board.

Should the mistaken identity theory be correct, the minimal size (length) of white sharks attacking pinnipeds (seals, sea lions etc) would be identical to the ones biting surfers. Additionally, the wound severity would also be identical between pinnipeds and surfers (boards and bodies).

Pinnipeds are very agile animals and it takes great skill for white sharks to run them down. Such can't be accomplished by young white sharks thus the minimum size of white sharks successfully attacking pinnipeds is around 4m. Furthermore, due to the agility of these mammals, the initial bite of a shark is massive to prevent escape.

The surfer-biting sharks show a much smaller size causing primarily superficial bites. Those bites would not suffice to incapacitate a pinniped if the shark would have made a mistake. Likewise, these sharks are also too small to have the capability of catching these pinnipeds in the first place.

Due to these results, it can be stated that white sharks biting surfers due to a mistake is false.

Should more than one bite occur, the motivation may still be of exploratory nature but could also reflect target practice, play behavior or pattern compensation, where the initial reaction of the surfer led to a follow-up bite. The paper further offers and discusses additional facts contradicting the mistaken identity theory.