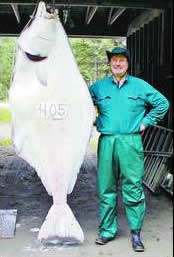 OLYMPIA, Washinton State -- Veteran anglers babble about landing halibut the size of a barn door, but that's a rare feat.

"It was the first halibut I ever caught," Hughes said. "That's the kicker."

Hughes looks small next to the massive, flat fish.

An exceptional halibut on the Washington coast is about 100 to 120 pounds, so Hughes reeled in the fish of a lifetime July 24.

Hughes and his fishing buddies were drifting along the Glacier Bay National Park shoreline in about 190 feet of water.

Glacier Bay, which is 65 miles from Juneau, is one of the most remote sports in the world. There are no roads to the park, so visitors arrive by ferry or airplane.

Glacier Bay, like much of coastal Alaska, is famous for huge halibut. Hughes and his friends came to Glacier Bay to catch big halibut.

The first fish of the trip was the biggest.

Hughes baited up with a big herring, and he sprayed it with a special Alaska concoction that has a very rude name.

That big bait was soon rattling along near the bottom as the boat drifted for about 2.5 hours.

The halibut ripped off a long run that almost emptied Hughes' reel of 100-pound-test PowerPro line.

"It almost pulled the rod out of my hands," Hughes said.

PowerPro is one of the new, super-tough lines that don't stretch and are stronger than steel.

These hard, thin lines are dangerous. The line can slice and dice your skin if it loops around your fingers or hands when a fish runs.

Many big-game anglers use these lines because they're less likely to wear and break when fighting a big fish.

Halibut are big, flat slabs of muscle, and they fight like a gigantic Frisbee.

The fish slide through the water and turn their broad sides toward the angler.

Reeling in a fish like that is like winching in a barn door outfitted with an outboard motor.

And, after a while, you hurt as much as the fish does.

"I was so pumped, and I was not going to let it get away."

After 45 minutes of pulling and reeling, the big fish was near the boat.

But big halibut are dangerous animals.

Alaska is famous for giant halibut, and anglers have a system for landing giant, mad fish.

A 100-pound halibut loose in the boat can break anglers' arms, legs or worse. A big fish thrashing around will also trash the boat.

A 405-pound fish can easily kill an angler.

Alaska guides usually shoot the fish before it comes about.

But Glacier Bay is a National Park, so firearms are not allowed.

It took a few whacks from a lead-filled aluminum baseball bat to kill the fish, and it took three men to pull it aboard.

And that fish of a lifetime -- and the first halibut -- was Hughes'.

Hughes and his friends caught other halibut on the trip, but even the 65-pounder -- a great fish anywhere -- looked small next to the 405-pounder.

Hughes brought 300 pounds of halibut on the flight home.

Hughes, his family and his friends aren't tired of eating halibut yet.

"We had guests over the other night for pan-fried halibut with homemade tartar sauce," Hughes said. "We've also had some good halibut with mango-basil sauce."

Hughes plans to go back to Alaska, but he doubts that he'll ever catch a bigger fish.

"I've been fishing on and off all my life," he said. "My grandfather taught me, and my career and marriage have put a dent in my fishing from time to time.

"But this is the ultimate."