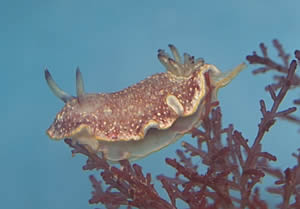 TALLAHASSEE, Florida -- Biologists with the Florida Fish and Wildlife Conservation Commission (FWC), along with scientists from California State Polytechnic University, have identified a new marine species found in the Gulf of Mexico. A scientific publication released Thursday officially announced the discovery of Chromodoris fentoni, a type of shell-less snail known as a nudibranch.

FWC biologists first observed this nudibranch when commercial aquarium-trade fisherman Daniel Fenton of Brandon donated sponges and other specimens to the FWC's Fish and Wildlife Research Institute (FWRI) in St. Petersburg in 2009. Fenton collected the specimens from the Gulf of Mexico, off Tarpon Springs. While sorting through the donation, FWRI biologists Nancy Sheridan and Joan Herrera observed the unusual creature.

"We were not able to identify one of the nudibranchs and realized that it was possible we were seeing something entirely new," said Sheridan. "The discovery was especially rewarding because it resulted from a cooperative effort between industry and science."

Herrera and Sheridan sent samples to Dr. Angel Valdes of California State Polytechnic University, and he verified that this species had never been documented.

"The opportunity to work with Dr. Valdes, a world-class nudibranch expert, has been really exciting for us," said FWRI Curator of Collections, Dr. Joan Herrera. "At FWRI, we receive thousands of specimens each year, yet it is rare to find a species that is new to science."

The article about C. fentoni appeared in the 2011 volume of the "American Malacological Bulletin," published Thursday, March 31. The article also notes that FWRI biologists found another species of nudibranch called Glossodoris punctilucens. This species had not been documented since 1890, except once in a photograph.

A member of the phylum Mollusca, adult nudibranchs have external gills and no shell. They typically feed on sponges, corals, anemones and other sea life. Nudibranchs come in various shapes and sizes, ranging from 1/8-inch to 2 feet in length. C. fentoni is a colorful creature with bright red markings on an off-white background. Its oblong body reaches an approximate length of 1 inch.

For more information on nudibranchs, visit MyFWC.com/Research, and search "Nudibranchs of Florida."