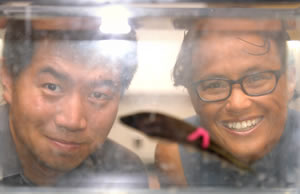 LAS CRUCES, New Mexico -- A new underwater stimulation system created by collaborators at New Mexico State University will assist in the study of electrical activity in aquatic vertebrates. This new technology may also help NMSU researchers reveal the connection between electricity and tissue regeneration in certain species of fish.

Graciela Unguez, professor of biology in the College of Arts and Sciences, presented the device at the international conference of the IEEE Engineering in Medicine and Biology Society in Italy this summer, following a two-year collaboration with NMSU electrical engineering assistant professor Wei Tang and a local systems engineering company called Visgence, Inc.

"We hope that a lot of people in our scientific community can see this as an opportunity for underwater research," Unguez said. "There are so many animal species out there that are not being studied that have huge potential to increase our knowledge base."

Though common in studies of land animals and insects, the form of electrical manipulation that Unguez and Tang's device allows is unprecedented in underwater research, due to environmental limitations like equipment corrosion and accessibility. The conference talk in Italy, titled "3-D-Printed wearable backpack stimulator for chronic in vivo aquatic stimulation," highlighted this new frontier in underwater engineering and neuroscience research.

The system contains a remote control, a stimulator circuit, a battery with a lifetime of more than 100 days, and a 3D-printed backpack that allows the targeted fish to carry all the equipment in waterproof enclosures.

"The stimulation pattern is a simple square pulse waveform," said Tang, who leads graduate students and contractors in the design of the system's sensor and stimulator circuits. "We can control the amplitude and the repetition rate of these pulses."

This species of fish, which is found south of the equator in South America and Africa, has a very specialized tissue, dubbed the electric organ. This organ generates an electrical field around the fish's body; it is believed that this electrical output allows the fish its ability to regenerate, or to restore its lost cells, tissues or organs, much like a lizard does after it loses its tail.

The cells of the electric organ develop from the fish's skeletal muscle, which is similar to the muscle that attaches to the bones in a human body. Without any manipulation, the fish can restore all tissues in its tail when a portion is removed or injured. However, through the insertion of electrodes into the spinal cord, Unguez is able to modify the electrical activity using the backpack's stimulator circuit, and document the effects of different electrical patterns on the fish's regenerative capabilities.

During previous stimulation experiments, electrodes that were attached to the fish and connected to devices outside the tank would detach within three or four days, Unguez explained.

Using the backpack, they can now stimulate remotely, outside of the tank as the fish moves freely.

"We can then start studying how the different types of stimulation that we deliver can affect the fish's ability not only to regenerate its tail, but also to change the properties of skeletal muscle and electric organ tissues," Unguez said.

Besides tissue regeneration, certain aquatic animals, like the knife fish, will generate electricity for the purposes of navigation, mate selection, communication, finding prey and self-defense.

"Us talking," Unguez said, "we use our voice â they use electricity. So it's a sense that is highly specialized; it's extremely complex in terms of the circuitry in their brain. This has implications for biophysicists, engineers and anyone looking at how this communication mode can take place underwater."

It is not yet known if the electric fish possesses anything genetically distinct that allows its muscle cells to generate this electric organ.

"So far, we have found nothing different in their genes compared to us," Unguez said. "An ideal, dream question is: Is it possible for us to convert some of our muscles into an electric organ, or a completely different cell type that we don't have? I think the answer is yes â it's just a matter of those electrical activity patterns basically giving the cells different signals, telling it what to make, what not to make, what shape to take on, etc."

In the future, Unguez will attempt to isolate and stimulate the electric organ cells from an electric fish's tail inside a petri dish. This will offer a more controlled experiment, and demonstrate the possibility of replicating the fish's internal process in an external environment.