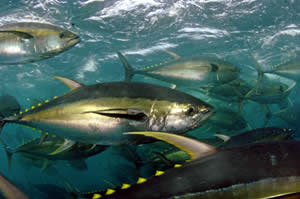 ARLLINGTON, Virginia -- A historic meeting next week may decide the fate of tuna in the Eastern Pacific Ocean, one of the world's most important marine resources.

The Inter-American Tropical Tuna Commission (IATTC) has an opportunity at its annual meeting June 23 – 27 in Panama City, Panama, to reverse a trend of inaction, and take concrete steps to stop the decline of tuna stocks. Failure of the IATTC to compromise effectively in the past has blocked the consensus required for the adopt ion of binding resolutions.

A coalition of organizations representing the international conservation community and the tuna industry agrees that urgent action is needed. The coalition is calling upon the Commission to follow the advice of its scientific staff to adopt time and area closures to protect tuna, and implement a research program to investigate how to manage fish aggregating devices (FADs) to reduce the capture of non-target species.

Bigeye and yellowfin tuna populations are falling and the average size of captured fish is shrinking, a clear sign that those tuna are in dire need of conservation measures. At the same time, the size and efficiency of fishing fleets continue to increase. As fish become less abundant, their market value rises, and operators invest more in technology resulting in more pressure on the stocks. In the face of declining populations, some nations are demanding the right to increase the size of their fishing fleets.

"Despite a clear legal mandate and declining tuna stocks, three international meetings of the IATTC held over the past year have failed to produce measures to protect the very resource upon which not only the tuna industry, but the health of the Pacific marine ecosystem depends," said Scott Henderson, director of marine conservation at Conservation International.

"This is truly the 'tragedy of the commons' in action," observed Meghan Jeans, Pacific fish conservation manager for U.S.-based Ocean Conservancy. "The health of the ocean environment, the long term sustainability of tuna stocks and the interests of many are being put at risk by the short-sighted self interest of a few," she added.

The IATTC is responsible for the conservation and management of fisheries for tunas and other species taken by tuna-fishing vessels in the eastern Pacific Ocean. It is comprised of 16 member countries. A fundamental problem underlying IATTC's failure to adopt effective science-based conservation measures is the inability of member states to negotiate measures agreed to by all.

Humane Society International's vice president Kitty Block remarked, "As it currently stands, there is every incentive to block consensus and none to reach it. If, instead, the fishery were shut down until consensus is reached, member countries would undoubtedly work harder to agree on effective management measures."

In 2007, representatives of the IATTC agreed to be more proactive in mitigating and preventing tuna stock declines and to undertake a comprehensive review of its performance. This review has yet to begin despite continuing stock declines.

"The IATTC once had an enviable track record of following scientific advice, conserving tuna populations and tackling major conservation issues like dolphin mortality," said Dr. Bill Fox, World Wildlife Fund vice president of fisheries. "It needs to recapture that spirit and dedication, perhaps using the new management ideas and methods it is exploring like property rights for fishermen."

"For conditions to improve, conservation groups, the tuna industry and seafood consumers need to cooperate and play a more effective role in promoting the adoption of responsible management measures," said Randi Thomas, vice president of sustainability at the National Fisheries Institute.