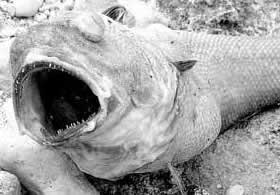 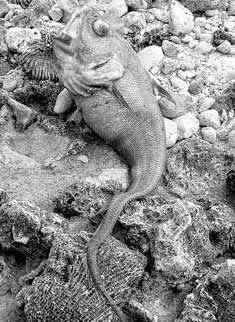 The long, eel-like tail tapers to a narrow point

Cayman Brac -- A strange looking sea creature washed up on the shores of Cayman Brac this weekend.

Layman Scott found the fish while walking along the beach early Sunday morning. It is roughly thirty inches long, more than half of which is a long, eel-like tail attached to a fish body. It has pale pink scales, pectoral fins, a dorsal fin and a small feathery fin on its belly.

Local fishermen say they have not seen a creature quite like this before. It has boney bristles all along its spine, right down to the tip of its tail and small sharp teeth, which curve slightly inward.

The sighting has been reported to the Department of Environment, but meanwhile, The Bracker and Little Caymanian is inviting readers to see if they can identify this fish.