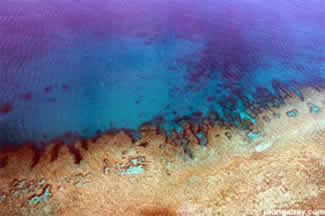 ACEH, Indonesia -- The impact of a tsunami on a coral reef is minimal in comparison to human-caused damage according to a new study published in the journal Atoll Research Bulletin.

Coral reef parks established by locals more effective than government reserves. Coral reef marine protected areas established by local people for traditional use can be far more effective at protecting fish and wildlife than reserves set up by governments expressly for conservation purposes, according to a study by the New York-based Wildlife Conservation Society (WCS) and other groups.

Reefs threatened by tsunami reconstruction. Indian Ocean coral reefs that escaped serious damage are coming under increasing threat from reconstruction efforts in the region according to a new report from the international environmental groups, World Conservation Union and the Global Coral Reef Monitoring Network.

"Basically we found that the early reports about tsunami devastation to the coral reefs on which the local tourism industry is based were grossly exaggerated," said Dr Andrew Baird of the Australian Research Council Center of Excellence for Coral Reef Studies who was a member of the assessment team. "Similarly, the tsunami had no detectable effect on reef fish assemblages at these sites. Damage to the corals ...was surprisingly limited and trivial when compared to pre-existing damage, probably caused by destructive fishing practices."

The researchers say that human use of explosives and poison for fishing has taken a heavy toll on reefs in the region but that reefs managed in the traditional Acehnese system were effective in protecting coral ecosystems.

"Coral cover was on average 2-3 times higher on reefs managed under the traditional Acehnese system, and in the Pulau Rubiah Marine Park compared to open-access areas," said Dr Stuart Campbell who leads the Wildlife Conservation Society (WCS) Indonesian marine program "The high quality of many of the reefs of Pulau Weh represents a considerable conservation achievement. While the condition of many reefs in the region remains a cause for concern, this is one of the few examples of successful marine resource management using both a traditional approach and marine reserves globally".

Dr Morgan Pratchett, also from the Center of Excellence for Coral Reef Studies added "The Acehnese traditional model has been successful because maintaining the livelihoods of the people is the main goal: people have not been excluded from the environment. Fishing pressure is managed through group decisions plus there is an effective means of conflict resolution".

"We have much to learn from the Acehnese experience." said Baird "Their success in the face of civil war, economic collapse, and catastrophic natural disaster is extraordinary, and the goal is to understand and replicate their success in other parts of Indonesia and the world".