Research Institute To Conduct One-Of-A-Kind Shark Race For Conservation Science; 'We Want To Have Some Fun' 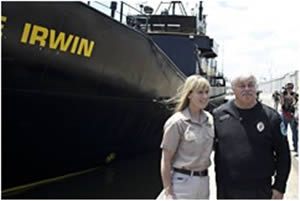 Captain Paul Watson: It's getting to the point that calling anyone a terrorist that someone disagrees with is becoming routine. It does not seem to matter if you are saving whales or running for President of the United States. Sea Shepherd has never injured a single person, we have never been convicted of a felony, we have never been sued, we are not on any no-fly lists nor are we on any international terrorist alert lists. We travel freely under our own passports and we speak openly and always on the record about our activities.

Eco-terrorism is actually the act of terrorizing the environment. Japanese whalers are targeting endangered whales in an established whale sanctuary in violation of a global moratorium on whaling and they are defending their illegal activities with firearms and concussion grenades.

Animal Planet, which is owned by Discovery Communications, contracted with Tennessee-based RIVR Productions to produce a new series called "Whale Wars", scheduled for broadcast in the United States in the coming weeks. RIVR joined the crew of one of the ships owned and operated by the militant animal rights group, Sea Shepherd Conservation Society, as it launched a series of criminal attacks on the high seas in January, February and March 2008 against vessels operated by ICR. In August 2008, the Tokyo Metropolitan Police Department issued arrest warrants for three of the Sea Shepherd militants for violating the Convention for the Suppression of Unlawful Acts against the Safety of Maritime Navigation (the SUA Convention of the International Maritime Organization).

Captain Paul Watson: The Sea Shepherd Conservation Society is not an animal rights organization. We are a marine wildlife conservation organization. We don't protest. We intervene against illegal activities that unlawfully exploit marine wildlife. The three "warrants" requested for the arrest of three relatively minor Sea Shepherd crew are not recognized by Interpol and it is a mystery as to why Japan issued warrants for three non-officers for the 2006/2007 campaign yet did not issue warrants for myself or any of my officers.

Unlike land-based eco terrorist groups, Sea Shepherd's modus operandi is to sabotage fishing operations by attacking vessels at sea beyond national boundaries, thereby avoiding prosecution. In March 2008, as the attacks on the ICR's vessels were taking place, a former Sea Shepherd and Earth Liberation Front (ELF) operative was given a one-year federal jail sentence in California for teaching people how to make a destructive device that could commit arson. A guidebook on eco-guerilla activity written by the head of Sea Shepherd, Paul Watson, contains a chapter on how to use fire against an "enemy".

Captain Paul Watson: Sea Shepherd has had 4,000 volunteers over the years yet the Japanese whalers can only cite one reference to one former crew convicted of a crime and that was an action completely separate from Sea Shepherd activities. More "criminals" can be found in the Japanese Diet or the U.S. Congress than amongst our former crew.

My book Earthforce! is based on Sun Tzu's Art of War which contains a chapter on the Use of Fire. My interpretation of this chapter was to specifically advise environmental activists from using fire i.e. arson as a tactic because it is unpredictable, uncontrollable and dangerous. It appears that the ICR read the title chapter but not the text.

Increased criminal violence against the Institute's research vessels coincided with the presence and filming by Animal Planet on the Sea Shepherd attack vessel. Animal Planet has itself admitted that the campaign "was particularly eventful" (Animal Planet press release, 10 July 2008). The violence included the deployment of propeller fouling devices constructed from steel cables, throwing acid, smoke bombs and bottles onto the decks of the ICR vessels and attempted collisions. Sea Shepherd has also welded a seven-foot steel blade to its ships to open the hulls of the vessels it attacks.

Captain Paul Watson: Sea Shepherd does not condone nor do we practice violence. We agree with the assessment by Martin Luther King that violence cannot be committed against a non-sentient object. Sea Shepherd sometimes damages equipment used for illegal activities but we have an unblemished record of never injuring a single person in over 31 years of operations. The Dalai Lama is a Sea Shepherd supporter and he would not condone our activities if they were violent.

The "acid" we throw is butter acid or rotten butter which is technically butyric acid. This "acid" is no more toxic or harmful than citric acid (also known as orange juice).

Animal Planet established no internal systems or safeguards to prevent its executive team, the production company and the ecoterrorists from colluding to carry out unlawful acts for the television cameras in order to produce sensational footage.

Captain Paul Watson: Animal Planet did not participate in any meetings or discussions of tactics and strategies, nor did it in any way attempt to collude with Sea Shepherd or influence our operations. Sea Shepherd conducted its campaign in exactly the same manner as it would have with or without a film crew on board. Animal Planet's film crew simply came on board and documented the events of the campaign as they unfolded.

In addition to Animal Planet's involvement with violent attacks against its ships and seafarers, ICR is concerned that broadcasting the series will serve to glamorize ecoterrorism and make future violent attacks more likely.

Mr. Minoru Morimoto, Director General of the Institute of Cetacean Research, said: "It is difficult to understand why a mainstream network would stoop so low as to produce a series that glamorizes and thereby gives support to ecoterrorism. Sea Shepherd's criminal actions last year in the Antarctic were encouraged directly through the presence of the Animal Planet film team. Animal Planet is responsible for inciting this increased violence and aiding and abetting an international criminal organization."

Captain Paul Watson: I find it difficult to understand how a civilized nation like Japan can stoop so low as to ignore international conservation law and continue to support the brutal slaughter of endangered whales in an established whale sanctuary.