Researchers: Color Patterns On Reef Fish Drive Evolution Of New Species; 'We Were At The Frontier' 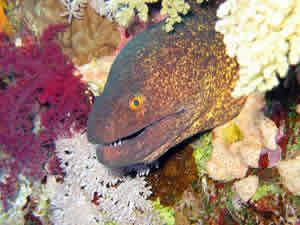 Gymnothorax flavimarginatus, the yellow-edged moray, a species whose genetic homogeneity was examined in a phylogeographic survey. credit wikipedia

ST. LOUIS, Missouri -- Joshua Reece became interested in moray eels in 2005 when he was applying to the PhD program at the University of Hawai'i. Instead of taking him on a campus tour, his host, Brian Bowen, PhD, a biologist at the university, took him on a dive. Along the southwest coast of Oahu, Reece looked under a rock ledge and was startled to see five different species of moray eels looking back. When he later captured the eels, he found the same fish species in all of their bellies.

What was up with the eels?

Reece, who is currently a graduate student in biology in Arts & Sciences at Washington University in St. Louis, still doesn't know the answer but having just completed the first phylogeographic survey of the Muraenidae, the family to which the eels belong, he now has a better sense of the problem.

Reece and his colleagues collected two species of eels, the undulated moray (Gymnothorax undulatus) and the yellow-edged moray (G. flavimarginatus) at a dozen different locations across the Indo-Pacific ocean. They were looking for genetic differences that might indicate interruptions in gene flow among populations of the eels either now or in the past.

The Indo-Pacific is a huge expanse of water, covering fully two-thirds of Earth's surface. Yet Reece and his colleagues found both species to be genetically homogeneous across the entire ocean basin.

Their results qualify the morays as the most cosmopolitan of reef fish but only deepens the mystery of how they â and the other 150 species of moray eel in the Indo-Pacific â formed separate species in the first place.

Nasty Customers One advantage of studying moray eels is that you're unlikely to be scooped by another doctoral studentânot if it means diving on reefs to collect eels.

Eels have many traits that suggest a lively intelligence. They are known, for example, for going on hunger strikes in captivity, and they hunt cooperatively with groupers in the wild.

On the other hand, they're also famous for sudden and egregious acts of aggression. Taped to Reece's office door is a meat-red photograph of a spectacular eel injury, a flayed forearm. He says he keeps it to remind himself to be careful around these fish.

"Morays have two sets of jaws," Reece explains: "Oral jaws and a set of jaws in their throat called pharyngeal jaws. Set into both pairs of jaws are big rear-facing fangs. When the eels attack prey, they actually bite them twice. They skewer prey with their oral jaws and then they launch the pharyngeal jaws into their mouths to drag it down their throats.

What's more, says Reece, once they bite, they often won't let go. You have to crush their skulls to get them off of you.

How do you collect an animal that served as the inspiration for the movie Alien?

Reece initially tried poking holes in a steel can, stuffing it full of fish and hanging it in a trap he threw into about four feet of water. "Within about 10 minutes," he says, "a four-foot moray swam up, nosed the trap, and swam into its opening. 'Oh, I thought, this is going to be easy.'"

"But then the moray bit the can in half in one bite. 'Whoa, I thought.' And then the moray turned around and bit through the mesh trap and swam away, taking its DNA with it." Not so easy after all.

In the end the team used two collection methods. Some eels were caught in hook-festooned funnel traps. "I've caught as many as 100 between four traps in a night." Reece says. Others were darted underwater. The biopsy dart, mounted on a seven-foot spear, takes a piece of tissue about the size of a pencil eraser, Reece says, and as a bonus dissuades the moray from molesting the diver.

His team collected 289 eels with only two injuries: a bite on a hand and one on a foot (of a documentary filmmaker who was tagging along with the scientists).

Ocean swimmers Less than one percent of the ocean consists of appropriate reef habitat, and adult reef fishes prefer to hang out at home, hiding from predators in the coral. How does it happen then, that the same species of fish can be found on widely separated barrier reefs or coral atolls?

The answer is that most reef fish have a juvenile stage called a pelagic (oceanic) larva that lets them disperse over open ocean.

The larvae either swim or drift in surface currents, sometimes modifying their buoyancy to use both surface and deep currents, writes Reece in the Journal of Heredity.

So important is this wandering phase that some biologists have proposed as a rule of thumb that the longer-lived the larvae (the longer the "pelagic duration") the more genetically homogeneous the species is likely to be.

Moray eels provide an ideal test of this idea. They are poor swimmers as juveniles, and adults stick to a few square meters of reef. On the other hand, they have an extremely long-lived pelagic form.

Whereas another fish's pelagic larvae might live for a month or two, moray eel larvae can persist for several months or even years.

"Most reef-fish larvae feed on plankton in the water column," Reece says. "Moray larvae are so simple, they can't digest plankton, so they feed on the shed exoskeleton of plankton and on plankton excrement."

"It's ironic these vicious predators start out too delicate to eat even plankton â they have to eat plankton poop and work their way up," he says laughing.

Barriers in the ocean? In biology textbooks the go-to mechanism for speciation (or the splitting of a population into two groups that no longer interbreed) is geographic isolation. One group gets separated from the other, by for example, the formation of a mountain, and then over time natural selection and genetic drift gradually remodel the two similar groups into two dissimilar ones.

The question is whether there are barriers in the ocean that play the same role in speciation as the mountain ranges do on land.

The Sunda Shelf, on the other hand, is an area of relatively shallow water between the Indian Ocean and the Pacific Ocean that has been repeatedly exposed when sea levels fell during periods of extensive glaciation.

Were the undulated and yellow-edged morays on either side of these barriers distinguishable genetically?

To find out the biologists looked at selected mitochondrial and nuclear genes and asked whether there were unique alleles (variants) of these genes and whether the degree of variance was correlated with geographic separation.

They found lots of variation among the eel genes they examined, but virtually none of it had any geographic structure. In other words where the eel was living didn't predict its genetic makeup.

"Some of the sampling sites are about 22,000 kilometers apart, so essentially two-thirds of the globe," says Reece. "Yet you find the same alleles in South Africa as you do in Panama."

"The only way to get shared genetic material across these distances," says Reece, "is through gene flow." The leptocephali, in other words, are efficiently ferrying genes from one population to the next, keeping the gene pool well stirred.

Several other reef fishes are also known to have highly dispersive pelagic stages. However, even these species show genetic partitions at major biogeographic barriers. The moray eels are in a class unto themselves, the champion dispersers.

Unsolved mystery Although the phylogeographic survey answered some questions, it raised others.

If both species of eel are able to maintain genetic connectivity across the entire ocean basin, how did the species arise in the first place?

And not just these two species. Altogether there are 150 species of moray eel in the Indo-Pacific, including the giant, ribbon, snowflake, zebra, dragon, pink-lipped and freckled morays, the slenderjaw, hookjaw, viper, vagrant, lipspot and enigmatic eels . . . and many more.

When and how did they form separate species if their larvae make them nearly impervious to geographic isolation?

To further complicate things, says Reece, many of eel species share habitat, share distributions and share prey items. In most groups, he says, when that happens one species outcompetes the other and the loser disappears. The same rules don't seem to apply in the morays and nobody knows why.

In other words, he may have found his postdoctoral as well as his doctoral research lurking under that ledge.