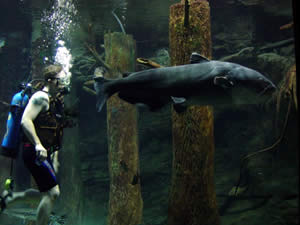 Splash came to live at TFFC on Jan. 14, 2004, after being caught from Lake Texoma by Cody Mullennix of Howe, Texas. At 121.5 pounds, she was the largest blue catfish ever caught and held that record until a 124-pound fish was caught from the Mississippi River in 2005.

During her time at TFFC, Splash was responsible for a large increase in visitation. She was the star of the daily dive show during which she ate chicken, herring or mackerel from the diver’s hand.

Splash was especially popular with children. On the first anniversary of her arrival at TFFC, nearly 800 people came to see her, and 133 children brought hand-made birthday cards. “You are my idol,” one said. Many others simply said, “I love you.”

Splash will be missed by the staff members of the Texas Freshwater Fisheries Center and by untold numbers of people who regarded her as a very special fish. She is survived by thousands of descendants in Lake Texoma.

A life-size replica of Splash is being prepared for display in the record fish area of TFFC, and her skeleton will be preserved for display as well.