Study: Fish With Parasites Attached To Their Heads Have Advantage Over Predators; 'This Is A Good Thing'

Research: Tadpoles Protect Themselves From Predators By Being A Not-So-Tasty Treat

Research: Certain Individual Fish in Schools Have Greater Influence When Fleeing from Predators 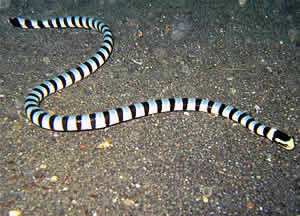 NEW YORK, New York -- In a deadly game of heads or tails venomous sea snakes in the Pacific and Indian Oceans deceive their predators into believing they have two heads, claims research published today in Marine Ecology.

The discovery, made by Dr Arne Redsted Rasmussen and Dr Johan Elmberg, showed that Yellow-lipped Sea Kraits (Laticauda colubrina) use skin markings and behaviour patterns to fool predators into thinking their tail is a second head, complete with lethal venom.

There are over 65 species of sea snakes in the tropical waters of the Southern Hemisphere, ranging from Africa to the Gulf of Panama. Most spend their entire lives in the sea, inhabiting shallow water and are active predators, feeding on small fish found around coral reefs. All sea snakes have extremely potent venom which is among the most toxic known in all snake species.

When hunting for food sea snakes probe crevices and coral formations, temporarily forcing them to drop their guard to threats from the surrounding waters and making them highly vulnerable to attack. However, the Yellow-lipped Sea Krait has been found to twist its tail so that the tip corresponds with the dorsal view of the head, which combined with deceptive colouring, gives the illusion of having two heads and two loads of deadly venom.

Apart from the Yellow-lipped Sea Krait the ecology of sea snakes has largely gone understudied, due mainly to their off-shore and nocturnal behaviour. Yet, despite the number of behavioural studies devoted to this species, the discovery of this false-head-behaviour is a hitherto overlooked anti-predator adaptation.

The discovery was made while senior author Arne Redsted Rasmussen was diving off the coast of the Bunaken Island in Indonesia. A large Krait was followed for thirty minutes, swimming between corals and crevices hunting for food. Rasmussen was momentarily distracted by a second snake, but when looking back he was surprised to see the "head" was facing him while the tail probed the coral. Rasmussen's surprise grew when he saw a second head emerge from the coral instead of the expected tail. It was only when the snake swam away that the first head was clearly seen to be a paddling tail.

To build upon this discovery researchers examined 98 Sea Kraits from three major museum collections in Paris, Berlin and Copenhagen while also monitoring the behaviour of wild Sea Kraits in Solomon Islands during the Danish Galathea 3 Expedition. The research confirmed that all snakes of this species had a distinctive colouration pattern, with a bright yellow horseshoe marking on the tip of the head and the tail. The yellow was deeper than the colours on the rest of the body and the black colorations were much longer than the dark bands on the rest of the body, highlighting the similarity between the head and the tail.

The reason for this mixture of behaviour and coloration results from a developed defence strategy needed when the snake is probing for prey. Despite being extremely venomous sea snakes are susceptible to attack from several predators such as sharks, large bony fishes, and even birds.

"The value of such an adaptation is twofold; it may increase the chances of surviving predator attack by exposing a less 'vital' body part, but more importantly it may deter attack in the first place if attackers perceive the tail as the venomous snakes head," said Rasmussen.

Similar defence mechanisms have been discovered in lizards, and some land snakes have developed ingenious camouflage deterrent behaviour strategies, but this defence has never been associated with other lethally venomous predators such as sea snakes.

Traditionally the only evidence of a defence behaviour strategy in sea snakes has been documented in individual cases, when a snake was exposed to and aware of an imminent danger. This research is the first record of a combined false-head-behaviour and false-head-camouflage defence strategy used as instinct when a snake is hunting for food.

"It is intriguing that this discovery is observed in this species, as one of the key differences between the Yellow-lipped Sea Krait and other sea snakes is that they spend almost equal time on land and in the sea," said Rasmussen. "They therefore live in two worlds where two very different rules of survival apply. It remains to be confirmed whether Sea kraits use their sea defence tactic of motioning their tails when on land."