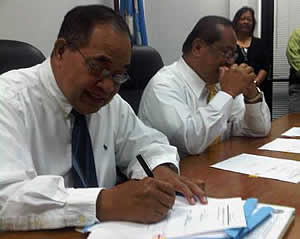 WildAid and Sharksavers congratulate Governor Fitial and the Legislature of the Northern Mariana Islands for passage of anti shark fin legislation.

In the Commonwealth of the Northern Mariana Islands (CNMI), Governor Benigno Fitial today signed into law an important bill - HB 17-94.

This measure will prohibit possession and sale of shark fins in the Commonwealth islands of Saipan, Tinian and Rota, and therefore become the first US territory to introduce legislation that addresses the shark fin trade.

This bill was closely modeled after the Hawaii Shark Fin bill of 2010, originally drafted by Hawaii State Senator Clayton Hee. This historic bill was the first of its kind in the world and has triggered a series of similar bills being introduced in Guam, California, Oregon and Washington. Senator Hee was a key supporter of the CNMI bill and continues to be a champion for shark conservation across the Pacific.

WildAid would like to commend Representative Diego Benavente for introduction of the measure in the CNMI and thank the many local activists and organizations that helped bring this important piece of legislation to fruition. We would also like to thank House Speaker Froilan C. Tenorio, Senator Jude Untalan Hofschneider and Senate President Paul Atalig Manglona for their support within the legislature.

"With passage of this bill yet another region of the Pacific takes a strong stand against the trade of shark fins and the sale of shark fin soup. It sets a great example for the region to ensure a sustainable future for the islands," said WildAid Executive Director Peter Knights.