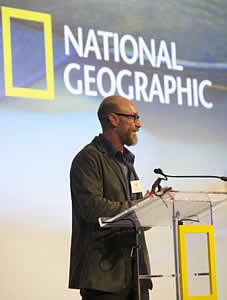 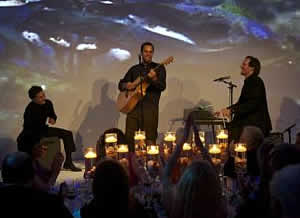 WASHINGTON, D.C. -- Three exceptional individuals and a corporation were honored by the National Geographic Society at its first ever "Evening of Exploration" gala event Thursday night, presented by Rolex.

Environmental anthropologist Kenny Broad and the late underwater photographer Wes Skiles were named "Explorers of the Year," a new award presented in recognition of their extraordinary achievements in exploring and documenting the Blue Holes of the Bahamas in 2010. Broad and the Skiles family each received a Rolex Explorer timepiece. Musician and environmental activist Jack Johnson received the newly created "Arts Ambassador for the Environment Award," presented to an individual in the entertainment field who has demonstrated leadership in environmental and cultural conservation by elevating issues of sustainability and inspiring audiences to care about the planet. The National Geographic "Chairman's Award" was presented to IBM for significantly advancing knowledge of the world through its research partnership with National Geographic on the Genographic Project, which is mapping the migratory history of humans.

"Those recognized last night set the gold standard in exploration, and their passion inspires all of us to care about the planet," said John Fahey, National Geographic's chairman and CEO. "It was a privilege to come together to acknowledge these explorers' many contributions â to our organization, certainly, but ultimately to mankind."

The theme of the inaugural "Evening of Exploration" celebration was "Oceans," and the event was attended by an all-star cast of explorers and other luminaries, including newly appointed National Geographic Explorers-in-Residence filmmaker James Cameron and marine ecologist Enric Sala, as well as other Explorers-in-Residence who presented the evening's awards: oceanographer Robert Ballard, marine biologist Sylvia Earle, wildlife filmmakers Dereck and Beverly Joubert and population geneticist Spencer Wells. Event co-chairs Catherine and Wayne Reynolds, Gayle and Ed Roski, and Christine and Stephen Schwarzman also joined the festivities.

The master of ceremonies was Wolf Blitzer, CNN's lead political anchor. Following the awards presentation, Johnson performed songs for the crowd. The menu was designed by renowned chef and National Geographic Fellow Barton Seaver. All of the food served was created with ingredients sourced from sustainable farms, and the sushi was made from "invasive species." Wine was donated by Iron Horse Vineyards. Additional support for the sold-out event was provided by GEICO. Proceeds from the evening will benefit National Geographic's Explorer programs, comprising the Explorers-in-Residence, Fellows and Emerging Explorers.

Kenny Broad is an environmental anthropologist who studies the relationship between humans and their environment. He has led or participated in extreme scientific and filmmaking expeditions on every continent â from urban jungles to the deepest caves on the planet â to gather information and samples that shed light on little-known environmental and cultural subjects. His most recent expedition, to the Bahamas Blue Holes, was featured as the cover story of the August 2010 issue of National Geographic magazine and as a NOVA-National Geographic one-hour television special.

Broad is a professor at the Rosenstiel School of Marine and Atmospheric Science and director of the University of Miami's Leonard and Jayne Abess Center for Ecosystem Science and Policy. He also co-directs the Center for Research on Environmental Decisions at Columbia University. Broad was selected as a 2006 National Geographic Emerging Explorer and was elected a Fellow National of the Explorers Club in 2009. He received his Ph.D. in anthropology from Columbia University in 1999.

Photographer Wes Skiles began to learn his craft in the most demanding environment on Earth: underwater caves. As a teenager, camera in hand, he explored Florida's underwater labyrinths to capture images of this never-before-photographed realm. He developed and refined the technique he became most known for: using multiple slaved strobes to dramatically illuminate and photograph this environment. Later, as explorations led Skiles to remote locations around the world, he strived to employ the latest technology, enhancing his ability to explore the environment and return with stunning images. He participated in caving and cave-diving expeditions in Mexico, Brazil, Puerto Rico, Australia, Antarctica and the Bahamas. As an expedition cameraman, Skiles specialized in capturing images of people and wildlife on the edge of extreme frontiers. His visual imagery provided the viewer with an intimate understanding and unique perspective of his subjects. Skiles worked as a freelance photographer and produced, directed and filmed over 100 television films, many of which have won international awards and acclaim. In July 2010, at the age of 52, Skiles died following the conclusion of a scientific research expedition off the east coast of Florida.

Jack Johnson grew up surfing and playing guitar on the North Shore of Oahu. He released his first album, "Brushfire Fairytales," in 2001 and in the last 10 years has released five more albums that have sold over 20 million copies worldwide. With his success, Johnson has always tried to take the spotlight and shine it on issues important to him. In 2003, Johnson and his wife, Kim, founded the Kokua Hawaii Foundation and Kokua Festival to support environmental education in Hawaii's schools and communities. Johnson, his Brushfire Records label and his touring crew have been leaders in the greening of the music industry in all areas of tour production and album packaging. In 2008, Johnson donated 100 percent of his tour profits to establish the Johnson Ohana Charitable Foundation, an endowment founded by Jack and Kim Johnson to support environmental, art and music education worldwide. One hundred percent of Johnson's current "To The Sea" tour profits also will be donated to charity. Tour profits, along with Johnson's personal charitable activities, have resulted in approximately $25 million donated to charity since 2001.

Johnson and his crew have taken many greening measures to minimize the environmental impacts of the 2010 "To The Sea" tour. These include reducing the use of single-use plastic bottles on tour and on stage, encouraging concert-goers to fill up reusable water bottles for free at water stations at every venue, and working to make the shows zero-waste events through recycling, composting and other means. Over the course of the tour, Johnson is collaborating with over 220 community groups focusing on plastic-free initiatives and sustainable local food systems, as well as environmental education, oceans and watersheds, tree planting and other hands-on community projects. Through his ongoing efforts to promote sustainability and to lead by example, Johnson has exemplified National Geographic's commitment to inspiring people to care about the planet.

Although National Geographic's scientific programs have benefited from the traditional sponsorship efforts from many companies over the years, its research partnership with IBM on the Genographic Project represents a dramatic and innovative new model for advancing scientific knowledge. Drawing on the capabilities of one of the world's largest private research labs, IBM scientists worked side by side with National Geographic Explorers to design and implement this groundbreaking initiative to map how mankind populated the planet. IBMers were among the primary authors on scientific publications, they designed and built the project master database and developed algorithms to support and improve the scientific process. They participated in educational initiatives, community relations, advertising, media relations and speaking engagements on a global scale. Tens of thousands of IBMers from dozens of countries personally contributed their DNA samples to advance the research. Such hands-on participation is consistent with the company's unique culture. It celebrated its 100th anniversary on June 16, 2011, with a global "day of service," during which more than 330,000 IBMers contributed a total of more than 265,000 hours to community service. Such efforts underscore the role of technology and technical expertise as a tool to build a "Smarter Planet" and address important issues such as community economic development, education, health, literacy and the environment.