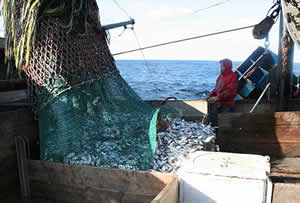 NEWARK, Deleware -- Butterfish may sound delicious, but local fishermen would rather keep them out of their nets. The small, silvery fish are protected by fishing limits yet frequently surface in tows when fishermen are trawling for squid. Too much of this unintended butterfish "bycatch" can get a fishery shut down by regulators for the year â before the squid allocation is caught.

The University of Delaware's Matthew Oliver, assistant professor of oceanography in the College of Earth, Ocean, and Environment (CEOE), is helping to address the problem. Combining satellite data with radar information on ocean currents, he and others are developing a model to predict where butterfish populations are most likely to be on any given day. Their habitat model could assist fishermen in avoiding butterfish while fishing for squid.

The study is a collaborative effort with Greg DiDomenico of the Garden State Seafood Association, John Manderson of the National Marine Fisheries Service (NMFS), and Josh Kohut and Laura Palamara of Rutgers University.

The researchers recently tested the accuracy of their predictions with an eight-day field experiment, sending daily reports to a fishing vessel roughly 200 miles offshore.

"We were taking real-time observations from satellites and high-frequency radar and sending it to fishermen to guide their fishing efforts," Oliver said. "I think it may have been the first time anything has been done like that."

Each afternoon Oliver provided NASA satellite data collected by CEOE's satellite receiving station to colleagues at Rutgers University, including ocean temperature and color indicating where water conditions change quickly. They combined it with updates on ocean currents and understanding of butterfish behavior; for example, the fish are more likely to be at the ocean's bottom during the daytime.

Then they used the data to create color overlays on Google Earth maps that looked similar to weather maps, except the color blue indicated poor zones for butterfish to live and orange marked areas with prime butterfish conditions.

The scientists then beamed their daily butterfish forecast map by satellite phone to fisherman Chris Roebuck and NMFS's Manderson aboard a squid boat near the edge of the continental shelf. The information was received through an underwater robot glider, a remote-controlled device that looks like a missile and normally darts through the ocean to sample water conditions.

The team strapped the glider to the top of the boat to both transmit information and track the boat's location every hour, which was preferable to the ship's satellite phone since it already had a communication protocol in place.

The fishermen used the map to sample areas where scientists predicted butterfish would and would not be to check if they were right. They sent catch data back to the team onshore through the glider.

Results showed that sometimes the model was slightly off, while the fisherman's guesses were correct. Other times, the model suggested successful spots the fishermen would not have otherwise tried. Overall, the model pointed the boat in the right direction to find butterfish based on features of the ocean's surface.

"It went really, really well," Oliver said. "It was a successful experiment in all respects."

Next, the researchers will analyze where and why the model was incorrect in some cases and how to improve predictions. The model may help define what preferred butterfish habitat is, Oliver said, and possibly shed light on why butterfish and squid seem to prefer similar habitats.

The hope is to give fishermen another tool beyond sonar and past experience in deciding where to trawl. The fishermen's initial feedback on the habitat model was that they could use it in a way similar to a weather forecast, providing general guidance on when and where to drop their nets.

The fishermen's input was valuable in developing the model, and Oliver, Kohut and Manderson held workshops with them to decide what's important for the model based on their real-world experience. The collaboration between the fishing industry, academia and government demonstrates how real-time ocean observing can be useful and important for fisheries, Oliver said.

"I hope this project will be a nice addition to ecosystem management," he said.