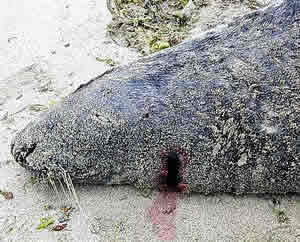 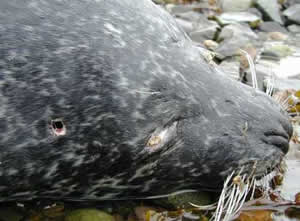 LONDON, England -- Campaigners’ seeking an end to what they believe is the slaughter of thousands of seals in Scottish waters by the salmon industry every year today released the results of a new poll revealing that the majority of the UK public want better protection for UK seals and for retailers to stop buying salmon from producers that shoot them.

The Poll, conducted by YouGov (17-20th July) revealed that 64% of the public think the law should be changed to protect all UK seals from deliberate killing, with just 13% disagreeing.

58% believe that High Street retailers should not buy salmon from any suppliers that kill UK seals’ with only 15% disagreeing.

“With the majority of people supporting a change in the law to protect seals and believing that High Street retailers should not buy salmon from producers that shoot seals, the tide is turning against the routine killing of our seals” said Andy Ottaway of the Seal Protection Action Group, “Even in these harsh economic times over half of the salmon buying public said they would be prepared to pay more for salmon products to stop seals being killed”.

Under the Conservation of Seals Act (1970), seals can be killed in Scotland and the rest of the UK to prevent ‘serious damage’ to fish stock or equipment. Seals can even be killed in the closed or breeding seasons despite the risk that dependent pups will be left to starve. The campaigners argue that salmon can and should be protected by measures that do not involve the killing of seals, such as the mandatory use of anti-predator netting and other devices on fish farms.

The campaigners, from the Seal Protection Action Group and International Animal Rescue, claim that thousands of seals are shot in Scottish waters alone each year. The Industry has disputed these figures, but under existing laws there is no requirement to report the numbers being killed.

127 MPs have signed a Parliamentary Motion calling for the law to be changed to protect seals from all deliberate killing and for the British and Scottish Governments to liaise on the issue. The Scottish Government has already begun a programme of selective culling of seals in the Moray Firth that it intends to expand throughout Scotland. Additionally, the Scottish Government wants to introduce a licensing scheme for killing seals that would require reporting the number of seals being shot. The British Government has said that seals are a devolved issue for Scotland and that the law protecting seals is perfectly adequate.

Common seals are suffering what has been described by Seal Mammal Research Unit (SMRU) scientists as a ‘frightening decline’ nationwide. Although shooting is not directly blamed the campaigners believe that it should be banned to allow populations to recover. The campaigners also accuse the industry of a ‘culture of killing seals’ that they believe can only be changed with a change in the law.

The campaigners dismissed recent reports that grey seals might ‘impair the recovery of cod stocks’ arguing it was ‘too simplistic and convenient’ to blame seals when clearly chronic over-fishing had caused the collapse and that other factors, such as climate change, were impacting upon their recovery.

Alan Knight, Chief Executive of International Animal Rescue, said: “Marine ecosystems are far too complex simply to blame seals for the collapse in fish stocks. Common seals are one of the UK’s most popular marine mammals and now we know that most people in the UK don’t want them to be slaughtered to put salmon on their plates. Fish farmers must be persuaded to adopt alternative means of protecting their salmon that will allow seals to be left in peace.”