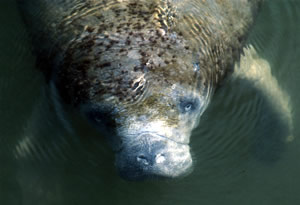 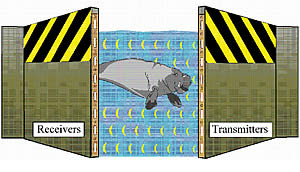 Researchers have developed a unique acoustic system to keep manatees from being injured or killed by flood gates and boat locks.

FORT PIERCE, Florida -- Researchers at Harbor Branch Oceanographic Institute at Florida Atlantic University have developed and improved upon a unique acoustic system designed to keep manatees from being injured or killed by flood gates and boat locks. Locks are used on sections of a canal or river that may be closed off by gates to control the water level to enable the raising and lowering of boats passing through.

The "Manatee Acoustic Detection Sensor Protection System" is composed of an array of unique acoustic transmitters and receivers that provide non-contact detection of manatees as they pass through the gates of the lock. When a manatee blocks the acoustic beams, which they cannot hear, the gates stop and remain open long enough to allow them to pass through safely. Harbor Branch recently received a $5.8 million federal contract from the U.S. Army Corps of Engineers to install the system in southern Florida on the six navigation locks around Lake Okeechobee. Among these are Moore Haven lock at Clewiston and the Port Mayaca lock where the St. Lucie River meets Lake Okeechobee, a waterway that links the Atlantic Ocean to the Gulf of Mexico.

Renowned as a hub of aquatic research, engineers at Harbor Branch designed manatee protective pressure systems more than a decade ago for canal lift gates used by the South Florida Water Management District. Last summer, the Harbor Branch manatee protection team installed the system on the Ortona Lock on the Caloosahatchee River which is part of the Okeechobee Waterway System operated by the U.S. Army Corps of Engineers. The Corps wanted a new system for lock gates that swing open too fast and sent out a public request for bids for replacementâHarbor Branch's high frequency sound system won.

"This summer we'll be entering into phase 2 of the second year of this important project and we will begin assisting with the installation of the devices at six locks in Lake Okeechobee," said Larry Taylor, project manager for manatee protection systems at Harbor Branch. "We installed the prototype acoustic system about 10 years ago in the St. Lucie lock. Since then, we have redesigned the system with underwater sensor cartridges. The device is now smaller, cheaper, faster and easier to operate."

Aside from watercraft collisions, the highest incidence of human-caused mortality to manatees is due to entrapment in floodgates and canal locks. According to the Florida Fish and Wildlife Conservation Commission, locks or gates caused at least 191 manatee deaths statewide since 1974. Manatees live in shallow, calm rivers, estuaries, saltwater bays, canals, and coastal areas. They move from fresh to salt water easily and the Florida manatee frequents most areas of Florida. It is estimated that there are approximately 3,000 Florida manatees in existence today.

"We are extremely proud to have received this federal contract to continue our efforts in safeguarding manatees," said Dr. Shirley Pomponi, executive director at Harbor Branch. "This project is very important to the Army Corps of Engineers and is part of years-long efforts on their part to have prevention measures in place."