Scientists: Radar Altimetry Revolutionizing the Study of the Ocean 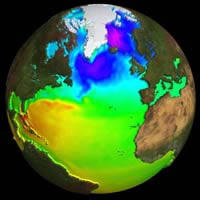 CAMBRIDGE, Massachusetts -- Imagine a space tool so revolutionary it can determine the impact of climate change, monitor the melting of glaciers, discover invisible waves, predict the strength of hurricanes, conserve fish stocks and measure river and lake levels worldwide, among other scientific applications. This instrument is not the subject of a science-fiction novel. In fact, four of them are already operating 800 kilometres above Earth.

Fifteen years ago this ground-breaking instrument, called a radar altimeter, was launched into orbit, despite speculation of its usefulness from the wider oceanographic community. Although it took over a decade for its full impact to be realised, its accomplishments have been so great that it is credited with having revolutionised the field of physical oceanography.

In honour of altimetry, oceanographers, glaciologists, hydrologists and geodesists from around the world have gathered in Venice Lido, Italy, at the '15 Years of Progress in Radar Altimetry' symposium, organised by ESA and the French Space Agency (CNES), to celebrate its success. Signifying its vast array of achievements, many have come to honour it for different reasons. According to one of the pioneers of the altimeter, Massachusetts Institute of Technology's (MIT) Carl Wunsch, its biggest contribution is conceptual rather than scientific because it changed the way scientists viewed the ocean.

"The greatest achievement of the altimeter is that it has showed us that the ocean system changes rather dramatically everyday and has shifted the view of it from this almost geological phenomenon creeping along very slowly to something much more interesting in which fluid is moving in all directions at all times," Wunsch said.

The radar altimeter offers valuable information on the state of the ocean by providing measurements of the height of the ocean surface. This is done by sending 1800 separate radar pulses down to Earth per second then recording how long their echoes take to bounce back.

Knowing the height of the sea surface tells scientists a great deal about what is happening at lower depths. Before the advent of radar altimetry, oceanographers had no way of looking at the ocean as a whole, which is essential because changes in one part of the ocean will eventually affect the whole rest of the ocean.

Lee-Lueng Fu of NASA's Jet Propulsion Laboratory came to the symposium to honour the altimeter's precision: "We are here to celebrate our success because we have managed to measure the height of sea surface with such extreme sensitivity that we are able to detect even two centimetres difference over 100 kilometres."

Because of this extraordinary ability oceanographers are able to measure changes in ocean currents and create a weather chart of ocean circulation for the first time – which Pierre-Yves Le Traon of the French Research Institute for Exploitation of the Sea (IFREMER) states as the instrument's most outstanding achievement.

This type of forecasting has enormous societal and economical consequences. For example, it allows scientists to forecast El NiÃ±o events and the flooding of low-lying areas (such as Venice), as well as predict the trajectory of pollutants, which allows oil spills to be contained more quickly by placing barriers in their pathways.

The ability to measure the sea surface height, which varies across the ocean, with such accuracy allowed oceanographers to discover planetary waves, which Paolo Cipollini, of the National Oceanography Centre in the UK, names as the real success story of radar altimetry.

Planetary waves, also called Rossby waves, were theorised to have existed in the ocean as far back as 1930, but it was impossible to know for sure because they occur internally and are very small on the surface, about 10 centimetres high, making them impossible to detect from onboard an oceanographic research vessel.

According to Cipollini, radar altimetry offered proof of these waves for the first time. As oceanographers started mapping the sea surface height, they began seeing the internal waves, which extend 500 or 1000 kilometres underneath the ocean, moving by following the measurements on the surface.

These waves are thought to be very important because they may be responsible for setting the main circulation patterns in the ocean. Cipollini said: "It has been suggested that planetary waves are one mechanism which brings nutrients from the deep sea up to the surface, which would make them important for the carbon cycle.

"So it could be that these mysterious waves that up until 20 years ago we weren't even able to see are also important for biologists and for people studying how the ocean is reacting to global warming."

ESA has had radar altimeters in orbit since July 1991, when ERS-1 was launched, which was followed by ERS-2 in 1995 and Envisat in 2002. The joint French Space Agency (CNES) and NASA mission TOPEX-Poseidon launched an altimeter in 1992, with follow-up mission Jason-1 flown in 2001.