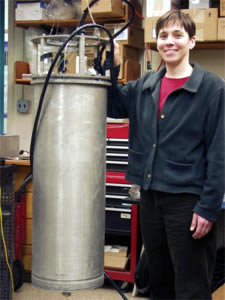 WOODS HOLE, Massachusetts -- Through the use of an automated, underwater cell analyzer developed at the Woods Hole Oceanographic Institution (WHOI), researchers and coastal managers were recently able to detect a bloom of harmful marine algae in the Gulf of Mexico and prevent human consumption of tainted shellfish. Shellfish beds in parts of Texas have been closed for a month, though they are expected to re-open in the next few days.

Working with Rob Olson and Heidi Sosik—plankton biologists and instrument developers at WHOI—biological oceanographer Lisa Campbell of Texas A&M University used their “Imaging FlowCytobot” instrument to detect a substantial increase in the abundance of the algae Dinophysis acuminata in the waters of Port Aransas, Texas.

Dinophysis acuminata produces okadaic acid, a toxin that accumulates in shellfish tissues and can cause diarrhetic shellfish poisoning (DSP) in humans. DSP is not life-threatening, but symptoms include nausea, cramping, vomiting, and diarrhea. Cooking does not destroy the toxin in the shellfish.

The Imaging FlowCytobot, which is automated and submersible, counts microscopic plants in the water and photographs them. The images and data are relayed back to a shore-based laboratory, where specially developed software automatically classifies the plankton into taxonomic groups.

“It is very satisfying to find that a technology we developed as a research tool can be so effective for protecting human health,” said Olson, who has worked with Sosik for several years to prototype and modify flow cytometers, which are more typically used in many biological and medical laboratories. “We designed the Imaging FlowCytobot for continuous monitoring of a wide range of plankton, and that turns out to be just what was needed to detect a harmful algal bloom that no one expected.”

The discovery of the Dinophysis bloom came while the researchers were actually looking for something else. Campbell, Olson, Sosik, and colleagues deployed the instrument in the fall of 2007 at the University of Texas Marine Sciences Institute’s lab in the Mission Bay Aransas National Estuarine Research Reserve.

Their principal goal was to observe Karenia brevis, another toxic alga that blooms periodically in the Gulf and can lead to neurotoxic shellfish poisoning. The research team would like to observe the next K. brevis bloom before it happens; such blooms are most common and most extreme in the Gulf of Mexico in the late summer and fall. The team is also working to catalog the types and relative abundances of marine plants in the area throughout the year.

In mid-February 2008, Campbell reviewed plankton images collected by the Imaging FlowCytobot and detected a substantial increase in the abundance of the dinoflagellate Dinophysis, which occurs naturally in ocean waters worldwide but not usually in harmful quantities. “We have never before observed a bloom of Dinophysis acuminata at such levels in the Gulf of Mexico,” Campbell said.

After reporting the increase to fellow researchers in coastal Texas, Campbell and colleagues collected water samples to confirm that algal toxins were present in the water. Other researchers collected oyster samples and sent them for toxin analysis at a U.S. Food and Drug Administration laboratory.

On March 8, the Texas Department of State Health Services closed Aransas, Corpus Christi, and Copano bays to shellfish harvesting and recalled Texas oysters, clams, and mussels that had been sold between March 1-7. A week later, six other bays and estuaries along the coast were closed. As of April 11, most shellfishing areas had been re-opened, and the Aransas, Copano, and Corpus Christi were expected to re-open in a matter of days.

The bloom and subsequent warning occurred just days before the Fulton Oysterfest, a major shellfish festival in the region. At last report, no shellfish-related human illnesses have been reported in Texas this spring.

“This is exactly what an early warning system should be,” said Campbell. “It should detect a bloom before people get sick. So often, we don’t figure out that there is a bloom until people are ill, which is too late. The Imaging FlowCytobot has proven itself effective for providing an early warning.”

“With time, we have come to see that the instrument has obvious practical uses,” added Sosik. “It now appears ready to make the transition from basic research tool to operative tool.”