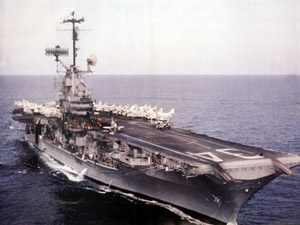 ATLANTA, Georgia -- The EPA issued to the U.S. Navy and the state of Florida an Approval to Dispose of Polychlorinated Biphenyls (PCBs) contained in electrical cable and other non-liquid materials and equipment onboard the decommissioned USS Oriskany. This approval allows the Navy to deploy the ex-Oriskany as an artificial reef in the East Escambia Large Area Artificial Reef Site, located in the Gulf of Mexico, approximately 23 miles south of Pensacola, Fla.

“This is a significant milestone for EPA, the Navy and the State of Florida,” said EPA Deputy Regional Administrator Stan Meiburg. “We are pleased to be able to work with the Navy and Florida in protecting our environment and moving this project forward.”

Based on EPA’s and the Science Advisory Board’s review of the information provided by the Navy in the PCB disposal application, including leaching studies, fate and transport models, and human and ecological risk characterizations, EPA has determined that sinking the ex-Oriskany will not pose an unreasonable risk to human health or the environment. This EPA PCB Disposal Approval for the Navy and Florida applies only to the ex-Oriskany. EPA is currently developing a national approval process for disposal of ships containing non-liquid PCBs through reefing.

The Navy has prepared the vessel for reefing off the coast of Pensacola, Fla., by removing or minimizing materials that may adversely impact the marine environment. An estimated 700 pounds of PCBs contained in felt and foam gaskets, electrical cable, insulation, and heat-resistant paint remain aboard the vessel. In accordance with the Toxic Substances Control Act (TSCA) and its implementing Federal PCB regulations, the Navy applied for a risk-based PCB disposal approval to sink the vessel with the non-liquid PCBs onboard.

The state of Florida and the Navy have developed an agreement that will result in the transfer of the reefed vessel to the State. The PCB Disposal Approval requires the Florida Fish and Wildlife Conservation Commission, in cooperation with the Escambia County Marine Resources Division, to establish a monitoring program to ensure that fish caught at the ex-Oriskany site remain safe for human consumption.