Scientists: Speed Matters For Ice-shelf Breaking; 'there Is So Much Variability' 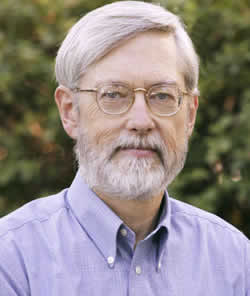 Greg Rau, a senior scientist with the Institute of Marine Sciences at UC Santa Cruz.

LIVERMORE, California -- Using seawater and calcium to remove carbon dioxide (CO2) in a natural gas power plant's flue stream, and then pumping the resulting calcium bicarbonate in the sea, could be beneficial to the oceans' marine life.

Greg Rau, senior scientist with the Institute of Marine Sciences at UC Santa Cruz and who also works in the Carbon Management Program at Lawrence Livermore National Laboratory, conducted a series of lab-scale experiments to find out if a seawater/mineral carbonate (limestone) gas scrubber would remove enough CO2 to be effective, and whether the resulting substance â dissolved calcium bicarbonate â could then be stored in the ocean where it might also benefit marine biota.

In addition to global warming effects, when carbon dioxide is released into atmosphere, a significant fraction is passively taken up by the ocean in a form that makes the ocean more acidic. This acidification has been shown to be harmful to marine life, especially corals and shellfish.

In his experiments, Rau found that the scrubber removed up to 97 percent of CO2 in a simulated flue gas stream, with a large fraction of the carbon ultimately converted to dissolved calcium bicarbonate.

At scale, the process would hydrate the carbon dioxide in power plant flue gas with water to produce a carbonic acid solution. This solution would then be reacted with limestone, neutralizing the carbon dioxide by converting it to calcium bicarbonate â and then would be released into the ocean. While this process occurs naturally (carbonate weathering), it is much less efficient, and at a much slower pace to be effective.

"The experiment in effect mimics and speeds up nature's own process," said Rau. "Given enough time, carbonate mineral (limestone) weathering will naturally consume most anthropogenic CO2. Why not speed this up where it's cost effective to do so?"

If the carbon dioxide reacted with crushed limestone and seawater, and the resulting solution was released to the ocean, this would not only sequester carbon from the atmosphere, but also would add to ocean alkalinity that would help buffer and offset the effects of ongoing marine acidification. Again, this speeds up the natural CO2 consumption and buffering process offered by carbonate weathering.

Earlier research has shown that ocean acidification can cause exoskeletal components to decay, retard growth and reproduction, reduce activity and even kill marine life including coral reefs.

"This approach not only mitigates CO2, but also potentially treats the effects of ocean acidification," Rau said. "Further research at larger scales and in more realistic settings is needed to prove these dual benefits."

Rau said the process would be most applicable for CO2 mitigation at coastal, natural gas-fired power plants. Such plants frequently already use massive quantities of seawater for cooling, which could be cheaply reused for at least some of the CO2 mitigation process.

"This method allows a power plant to continue burning fossil fuel but eliminate at least some of the carbon dioxide that is emitted, and in a way that in some locations should be less expensive and more environmentally friendly than other carbon dioxide sequestration methods" he said.