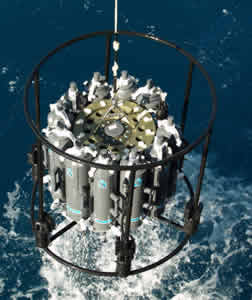 VICTORIA, Australia -- Australian, Belgian and New Zealand scientists have expanded our understanding of the way phytoplankton take up scarce iron in the ocean â a process that regulates ocean food chains from the bottom up and helps remove up to 40 per cent of carbon dioxide (CO2) from the atmosphere.

Research published recently in the Proceedings of the National Academy of Science explores the relationship between iron, which limits primary productivity in vast regions of the ocean, and its uptake by phytoplankton species.

It has identified how natural organic compounds in the Southern Ocean can control iron availability to phytoplankton in iron-deficient waters and, in particular, for high-nutrient but low-chlorophyll regions.

"The anaemic regions of the oceans are a 'battlefield' for iron, which drives photosynthesis and enhances growth of phytoplankton and other microbes in the oceanic food chain for the benefit of all marine species," said the project team's leader, former CSIRO Postdoctoral Fellow and now University of Technology Sydney researcher, Dr Christel Hassler.

"Ocean chemists are eager to know more about this process, which mediates uptake of CO2 and its subsequent storage in the ocean interior, as species die and sink.

"This research reveals the significance of a newly identified organic mechanism controlling the bio-availability of iron to oceanic life," Dr Hassler said.

According to co-author, CSIRO's Dr Carol Nichols, given that marine phytoplankton contribute up to 40 per cent of global biological carbon fixation, it is important to understand what features control the availability of iron to these organisms.

"Phytoplankton and other microbes living in the oceans produce long sugar polymers, or polysaccharides, as a survival strategy," Dr Nichols said. "Polysaccharides help the microbial community stick to each other and to nutrients that may otherwise be difficult to access from the surrounding ocean.

"Working with laboratory cultures of Southern Ocean phytoplankton, the study shows that biologically-produced polysaccharides help keep iron accessible to phytoplankton by increasing its solubility in the upper layers of the oceans where photosynthesis occurs,.

"In the ocean, most of the iron is bound to organic materials whose nature is largely unknown. Most marine microorganisms release saccharides or sugars, resulting in high levels being reported. These observations originally motivated our study," Dr Nichols said.

Iron fertilization of the ocean has long been mooted as an option to engineer change in the amount of CO2 in the ocean.

"If we can understand the processes behind cycling of iron and other micronutrients in the oceans more fully, then we will be in a better position to counsel on proposals for such environmental engineering," Dr Nichols said.