Safety Questions After Visitors Bitten at Kentucky Shark Petting Exhibit; 'They Don't Mind At All' 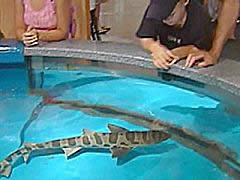 Almost a dozen people have walked out of the Newport Aquarium's Shark Central exhibit wearing Band-Aids after they were bitten.

The exhibit has almost 20 sharks for visitors to touch. Some are babies, some are adults -- 2 to 8 feet long. All of the sharks were chosen specifically for their behavior.

"What's the reaction to people touching them? They do not mind at all," aquarium biologist Scott Brehob said. "I've had kids that are anywhere from 8 months to 2 years to 3 years touching these animals."

Although the sharks did draw blood from a few of the visitors they bit, aquarium officials said the injury is no worse than a paper cut.

"It's more like the lines of a catfish," Brehob said. "They are bristle-type teeth. It's like a broom."