Rhinodoras gallagheri, a new species of catfish described by Dr. Mark Sabaj PÃ©rez of The Academy of Natural Sciences, is named for the museum's retire 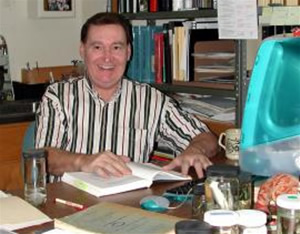 Frank Gallagher, The Academy of Natural Sciences' retired mailroom supervisor, is the inspiration for the name of a newly described catfish species.

PHILADELPHIA, Pennsylvania -- He's not well known like President Bush and musician Neil Young, but Philadelphian Frank Gallagher now has something in common with them: He has a new species named after him.

Gallagher was The Academy of Natural Sciences' affable mailroom supervisor for 37 years before retiring in 2003. "They used to call me 'the grapevine,'" said Gallagher, because he not only distributed the mail to the staff but also passed along the latest gossip. Now he is the inspiration for Rhinodoras gallagheri, a new species of catfish described by Academy fish scientist Dr. Mark Sabaj PÃ©rez in the March issue of Copeia.

New species often are named for prominent scientists, generous benefactors or even spouses. A biologist recently named a new trapdoor spider after popular singer-songwriter Neil Young. A few years ago an entomologist named a new slime-mold beetle after the president. Rarely, if ever, has a new species been named for a postman.

"I wanted to honor Frank for his many years of dedicated service to the global community of taxonomists and systematists in handling the shipping and receiving of countless loans of biological specimens," said Sabaj PÃ©rez, who manages the Academy's collection of 1.3 million fish. "I was impressed by Frank's dedication, his love for fellow employees, and his keen interest in the science we do. I simply thought, here is a guy who should be honored with his own catfish."

The Academy's Ichthyology Collection is one of the oldest of its kind in the Western Hemisphere, with 2,800 primary types. (A type is an original specimen from which the description of a new species is made.) The collection is an invaluable reference to researchers around the world who contact Sabaj PÃ©rez for access to specimens and data.

Rhinodoras gallagheri, commonly known the Orinoco thicklip catfish, occurs in the Orinoco basin in Venezuela and Colombia. It is a secretive fish that hides during the day in hollow logs or the deep, dark channels of large rivers. At night it sometimes can be found in swift-flowing rapids, foraging the bottom for aquatic insects.

Sabaj PÃ©rez discovered two specimens of this fish in the Academy's collection a few years ago and recognized them as distinct from other species in the same genus, Rhinodoras. The specimens had been collected in 1989 by former Academy scientists and their Venezuelan colleagues. Sabaj PÃ©rez secured more specimens from Venezuela and proved that the species was distinct.

Since retiring from the Academy, Gallagher has enjoyed tending to his garden in Southwest Philadelphia, his 40-gallon fish tank, some turtles and a dog. Of the honor of being enshrined with a thicklip catfish, Gallagher simply said, "I thought it was nice of him."

Before handing in the mailbag, Gallagher used to say to staff, "I've been here so long, I should be part of the collection by now." In the naming of Rhinodoras gallagheri, he now is.