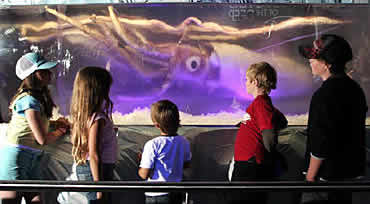 MELBOURNE, Australia -- The crew of a New Zealand fishing trawler were lucky Archi the giant squid was dead when they hauled him up on deck.

Ned Land, of Disney fame, was not so lucky when a giant squid attacked him in the 1950s film 20,000 Leagues Under the Sea.

But children who come to view Archi, whose tentacles are doubled back and forth above him in a custom-made box in Melbourne Aquarium, will be safe. The 7m monster is trapped in the biggest block of ice ever made in Australia.

"You could call it a monster," says curator Nick Kirby. "It looks like it almost wants to come out of the ice."

Fascination with the giant squid stems from years of unconfirmed reports from fisherman about their boats being attacked by the creatures.

Stories of the beasts taking on sperm whales and coming out victorious were dismissed as fantasy until scientists agreed it was possible.

And adding to its mystique, a giant squid had never been observed alive until a Japanese film crew captured one off the Ogasawara Islands in September last year.

Mr Kirby says the aquarium has been given three giant squids in the past, but this year is the first time staff have successfully encased one of the animals in ice.

"We experimented to see which was the best way to have a clear-ice display of the squid," he says. "That means freezing it over weeks, rather than hours. You've got to hold everything in place while it freezes.

"Now it's held in place with a mixture of wire that goes through the tentacles and body, and nylon and weights."

The freezing process took three weeks, says icemaker Rohan Donohoe. He had to freeze the ice slowly to stop it from cracking. The entire process cost more than $50,000.

"We ran circulating pumps and filters to keep the water clear," he says. "It was a big pain to move around because it weighed so much."

His ice enclosure will remain fresh for about a year, and Mr Kirby says after that another block will probably be made to allow the exhibition to continue or travel.

Melbourne Aquarium's Monsters of the Deep exhibition opens tomorrow and will run until January 26.