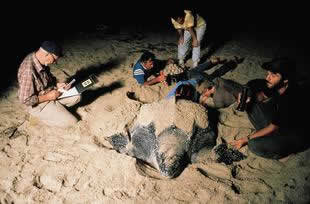 ST. CROIX, Virgin Islands -- The first week in May marked the emergence of the first hatchlings from leatherback turtles nesting on Sandy Point, St. Croix, U.S. Virgin Islands. If this year follows recent trends, it will continue one of the most positive turns for these endangered turtles, according to Earthwatch-supported findings recently published in the journal Biological Conservation.

The Biological Conservation paper reports on the results of monitoring and conservation efforts at Sandy Point National Wildlife Refuge, a three-mile stretch of beach on St. Croix, between 1982 and 2001. The authors found a marked increase in the number of nesting leatherback females from less than 30 in the 1980s to 186 in 2001, as well as a more than 20-fold increase in annual hatchling production from around 2,000 to more than 49,000.

“There have been recent publications documenting long-term increasing trends for other species of sea turtles. However, our publication is the first to link nesting beach conservation to an increase for any species, and is the only long-term time series on leatherbacks,” said Dr. Peter Dutton, coauthor of the paper. Dutton is a researcher with the U.S. National Marine Fisheries Service and principal investigator of Earthwatch’s Saving the Leatherback Turtle project, along with Jeanne Alexander-Garner (Texas A&M University) and Steve Garner (West Indies Marine Animal Research and Conservation Service).

Although leatherback turtles are at serious risk of global extinction, the rise of nesting populations on St. Croix holds promise for other nesting populations around the world. The study also provides the first reliable estimate of survival probabilities for nesting adult female leatherbacks, through the use of Passive Integrated Transponder (PIT) tags and photo-identification. Using these dependable mark-recapture techniques, applied since 1992, the authors found a surprisingly high survivorship estimate of 89 percent.

“The reason we were able to do this was because of the consistent effort on the beach: patrols carried out every night, all night, every year for the entire nesting season,” said Dutton. “This meant we were able to tag and monitor every female that nested, which would not have been possible without the consistent support from Earthwatch volunteers.”

Earthwatch’s Saving the Leatherback Turtle project began on St. Croix in 1982, under the leadership of the US Virgin Islands Department of Planning and Natural Resources. For the first four years, coauthor Rafe Boulon (now with the U.S. National Park Service) worked with field leaders Dr. Karen Eckert (Wider Caribbean Sea Turtle Conservation Network) and Dr. Scott Eckert (Duke University, and now principal investigator of the Earthwatch-supported Trinidad’s Leatherback Sea Turtles project). In response to these earlier efforts, the U.S. Fish and Wildlife Service established the nesting beach at Sandy Point as a national wildlife refuge and became actively involved with the project in the 1990s.

Since the beginning, Earthwatch volunteers on Saving the Leatherback Turtle have worked with the changing cast of scientists, including Dutton and his wife and lead author Dr. Donna Dutton (Ocean Planet Research), to patrol Sandy Point each night of the nesting season. They systematically identified each nesting turtle, counted its eggs, and moved nests that were at risk from erosion.

This year teams report that the first turtles nested on February 22, with hatchlings emerging the first week in May. They’ve had 71 turtles lay 150 nests so far, with 53 of those turtles returning from previous years.

Despite ongoing conservation efforts around the world, leatherback turtle populations have declined in recent years due to human impacts on nesting beaches and destructive fishing practices like longline fisheries. Eastern Pacific leatherback populations have virtually collapsed, and at present show little signs of recovery, despite beach conservation measures. Earthwatch-supported scientists working with leatherbacks on the Pacific coast of Costa Rica report that more than 120 turtles came to nest there this season, nearly twice last season’s count, but still a 90 percent drop from two decades ago.

“The St. Croix story is one of hope, as we struggle to prevent extinction of some of the Pacific leatherback populations,” said Dutton. “There has been much effort placed in reducing leatherback mortality from bycatch at sea. It is also essential to enact conservation measures to increase hatchling production if we hope for long term recovery of depleted leatherback populations.”

The Biological Conservation paper is also the first to use molecular genetics to show that new nesting female leatherbacks were the daughters of nesters from previous years. Dutton asserts that the relocation of nests below the high water mark and at risk of erosion was the simple management action that played a major role in the recovering trend of this once-depleted population.

“Donna and I sometimes wondered if all the sleepless night we spent walking the beaches, getting bit by bugs, soaked by the rain, covered in sand...if all the efforts would make a difference,” said Dutton. “We would watch the hatchlings get out into the surf and be gobbled up by voracious fish in the moonlight. In the early years, only a handful of turtles came back to nest each year. We are very gratified that we, along with all the other Earthwatch principal investigators and volunteers, stuck with it long enough to witness the rewards, as those hatchlings started coming back in larger numbers as adults years later.”

Not willing to rest on his laurels, Dutton admits that these hard won gains could be wiped out if adult survival drops for any reason, such as new fishing practices or environmental changes. He asserts that the continued intensive monitoring effort at Sandy Point, supported by eager and intrepid Earthwatch volunteers, is critical to providing this survival data and monitoring population trends in the region.

Earthwatch Institute is a global volunteer organization that supports scientific field research by offering members of the public unique opportunities to work alongside leading field scientists and researchers. Earthwatch’s mission is to engage people worldwide in scientific field research and education to promote the understanding and action necessary for a sustainable environment. The year 2006 marks Earthwatch’s 35th anniversary.