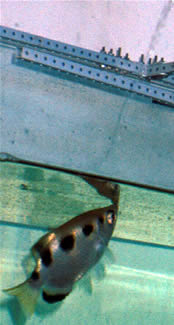 An archerfish firing a stream of water. Credit Stefan Schuster

Archerfish exhibit the remarkable ability to hunt for insects and other small terrestrial animals by firing precisely aimed streams of water that knock prey onto the water's surface. These water shots were once thought to be all-or-none in quality, but researchers have now discovered new levels of sophistication in the archerfish's hunting strategy that shed light on how this impressive predatory behavior has evolved. The findings are reported by Thomas Schlegel, Christine Schmid, and Stefan Schuster of the Universität Erlangen-Nürnberg in Erlangen, Germany, and appear in the October 10th issue of the journal Current Biology, published by Cell Press.

By employing high-resolution imaging of water streams fired during archerfish hunting, researchers have discovered that archerfish automatically tune the force they use to dislodge prey according to prey size, and that this strategy appears to be resistant to alteration by experience: It occurs even when the fish have been placed for two years in an environment that has been manipulated to make such tuning unnecessary for successful hunting. The findings suggest that the tuning aspect of the archerfish's hunting strategy is not as plastic in response to learning as might have been thought. Instead, the strategy may reflect the evolution of archerfish behavior in accordance with a recently discovered scaling law: Among animals such as flies and lizards, an animal's adhesive force--its natural tendency to stick to a surface--is closely proportional to the animal's size.

The researchers showed that for any given size of prey, the archerfish tune their attacks such that prey are hit with about ten times the force that adhesive organs of animals of that size could sustain.

The new work also revealed that the archerfish's hunting technique is metabolically costly and that the fish tune the force of their water shots by adjusting the mass of water in a shot, rather than altering the initial release pressure and speed of the shot. This turns out to be the most efficient way of adjusting force--by doubling the mass of water shot, the fish double the force that is applied to prey in a way that only doubles the energetic cost of the shot; doubling speed of the shot would require quadrupled energetic cost.