Sport Diver's Eric Michael Promoted To Editor; 'I Am Thrilled With The Opportunity'

Shake Up At Scuba Diving Magazine As Jason White Out, Keith Phillips In As Editor, Publisher 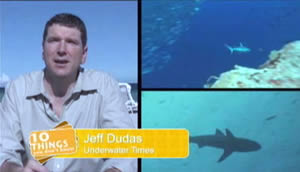 MIAMI, Florida -- The editor of UnderwaterTimes.com, Jeff Dudas, will be featured on an upcoming episode of the Travel Channel’s “Ten Things You Don’t Know About… Florida”, which premiers December 19, 2007 at 8.00pm.

Jeff Dudas was interviewed at length about shark attacks for the segment featuring Florida’s Volusia County as the shark bite capital of the world. As there were over a dozen attacks in 2007, New Smyrna beach, in Volusia County, lived up to its name.

“As editor of UnderwaterTimes.com, I literally sift through thousands and thousands of stories a year, all related to the oceans and world underwater. From my experience, nothing attracts the public’s attention like a shark story, especially a shark attack story. There’s something primal there, a creature in the ocean that may be hunting us, that grabs our attention.”

Dudas adds, “Though many sharks species are greatly imperiled throughout the world, depleted by long-line fishing and shark finning, the shark population in Florida is relatively healthy. On top of that, in New Smyrna, you have the perfect conditions for a shark attack: Plenty of bathers and surfer enjoying the beaches, murky water and an abundance of bait fish. Fortunately, there’s never been a fatal shark attack off New Smyrna beach.”