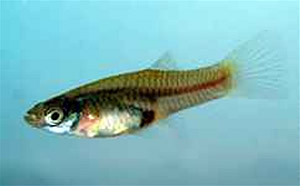 Female guppy looking over her shoulder

As every pet owner knows, animals may show individual traits just like humans and be shy or social, aggressive or gentle. Boldness, or the propensity to take risks, is an important animal trait because it affects species' diversity. 'Bold individuals are more likely to explore new environments and invade new habitats,' explains Dr Darren Croft from the Centre for Research in Animal Behaviour at the University of Exeter.

But while boldness is an individual feature, it may depend on social factors such as gender. Croft and colleagues decided to test this idea on guppies, a species of fish whose behavior is well-known from 50 years of field observations on the Caribbean island of Trinidad.

Female guppies tend to be more risk sensitive, but they are also 'constantly harassed by males, who will attempt non-consensual sex if the females ignore their displays,' says Croft.

To see how this sexual conflict affects individual boldness, Croft and his team collected wild guppies from the Aripo River in Trinidad and individually marked males and females.

In the first experiment, each marked fish was placed in a tank with two other fish of the same sex. The scientists created the illusion of a real-life risk by sliding the silhouette of a kingfisher over the aquarium. The guppies stopped swimming as the shadow of the predator passed above and froze at the bottom of the tank, waiting for the danger to go away.

The team then measured how long the fish took to resume normal behavior as a gauge the propensity to take risks: bold guppies were quicker to get on with their lives than shy fish. The experiment was repeated when the individually marked fish were placed in a tank with two fish from the opposite sex.

The results, reported online last week on Behavioral Ecology, reveal that guppies change their behavior according to their social environment: both sexes resume normal movement more quickly if they are surrounded by males.

Female guppies are bolder in the presence of males because in real life they are victims of extreme sexual harassment. 'If females remain still for too long, they risk being harassed by males,' says Croft. 'So it's advantageous for them to resume normal movement as soon as possible.' If they have only other females around, they can afford to be more cautious and take their time to let the danger pass.

In their natural environment, females go a step further and prefer to live in deeper areas of the river where predators lurk. Males are less keen to follow because they are more conspicuous with their brightly colored spots. For female guppies, 'risk-taking is a strategy to avoid harassment,' says Croft.

Males also become bolder when they shoal in a same-sex group, because sitting still too long can mean losing a mating opportunity to rivals. But when they're surrounded by females, being the first fish to move brings an increased risk of being caught and no extra benefit, so they take longer before they resume movement.

For Croft, the findings show that 'sex matters' for guppies because individual boldness depends on social context: 'what appears to be a good risk-avoiding strategy in same-sex shoals may be a recipe for trouble in a mixed-sex environment,' he says.