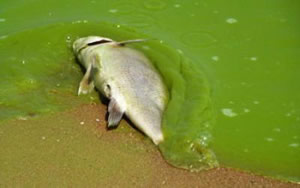 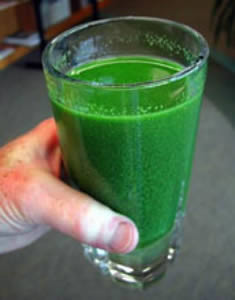 his image shows a cup of fouled water, scooped from Lake Erie during the algae bloom. Credit: Tom Bridgeman

The researchers also predict that, unless agricultural policies change, the lake will continue to experience extreme blooms.

"The factors that led to this explosion of algal blooms are all related to humans and our interaction with the environment," says Bruce Hamilton, program director at the National Science Foundation (NSF), which funded the research through its Water, Sustainability and Climate (WSC) Program.

WSC is part of NSF's Science, Engineering and Education for Sustainability (SEES) initiative.

"Population growth, changes in agricultural practices and climate change are all part of the equation," says Hamilton. "These findings show us where we need to focus our attention in the future."

Results of the research are published in this week's online early edition of the journal Proceedings of the National Academy of Sciences (PNAS).

"The 'perfect storm' of weather events and agricultural practices that occurred in 2011 is unfortunately consistent with ongoing trends," says Anna Michalak, the paper's lead author and a scientist at the Carnegie Institution for Science's Department of Global Ecology, located at Stanford University.

"That means that more huge algal blooms can be expected in the future, unless a scientifically-guided management plan is implemented for the region."

Freshwater algal blooms may result when high amounts of phosphorus and nitrogen are added to the water, usually as runoff from fertilizer.

When the plants and algae die, decomposers in the water that feed on them use up oxygen, which can drop to levels too low for aquatic life to thrive.

At first the Lake Erie algae were almost entirely Microcystis, an organism that produces a liver toxin and can cause skin irritation.

The scientists combined sampling and satellite-based observations of the lake with computer simulations to track the bloom.

It began in the lake's Western region in mid-July and covered an area of 230 square miles.

At its peak in October, the bloom had expanded to more than 1,930 square miles. Its peak intensity was more than three times greater than any other bloom on record.

The researchers looked at numerous factors that could have contributed to the bloom, including land-use, agricultural practices, runoff, wind, temperature, precipitation and circulation.

They found that three agriculture management practices in the area can lead to increased nutrient runoff: autumn fertilization, broadcast fertilization (uniform distribution of fertilizer over the whole cropped field), and reduced tillage.

These practices have increased in the region over the last decade.

Conditions in the fall of 2010 were ideal for harvesting and preparing fields and increasing fertilizer application for spring planting.

A series of strong storms the following spring caused large amounts of phosphorus to flow into the lake.

In May alone rainfall was more than 6.5 inches, a level more than 75 percent above the prior 20-year average for the month.

This onslaught resulted in one of the largest spring phosphorus loads since 1975, when intensive monitoring began.

Lake Erie was not unusually calm and warm before the bloom. But after the bloom began, warmer water and weaker currents encouraged a more productive bloom than in prior years.

The longer period of weak circulation and warmer temperatures helped incubate the bloom and allowed the Microcystis to remain near the top of the water column. That had the added effect of preventing the nutrients from being flushed out of the system.

The researchers' data did not support the idea that land-use and crop choices contributed to the increase in nutrient run-off that fueled the bloom.

To determine the likelihood of future mega-blooms, the scientists analyzed climate model simulations under both past and future climate conditions.

They found that severe storms become more likely in the future, with a 50 percent increase in the frequency of precipitation events of .80 inch or more of rain.

Stronger storms, with greater than 1.2 inch of rain, could be twice as frequent.

The researchers believe that future calm conditions with weak lake circulation after a bloom's onset are also likely to continue, since current trends show decreasing wind speeds across the United States.

That would result in longer-lasting blooms and decreased mixing in the water column.

"Although future strong storms may be part of the new normal," says Michalak, "better management practices could be implemented to provide some relief to the problem."