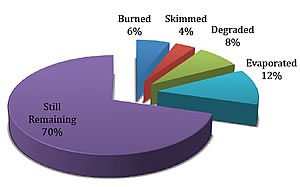 The High Loss Rate Oil Budget is based on high rates of evaporation on the sea surface and high rates of oil degradation. credit Sea Grant Georgia

ATHENS, Georgia -- A report released today by the Georgia Sea Grant and the University of Georgia concludes that up to 79 percent of the oil released into the Gulf of Mexico from the Deepwater Horizon well has not been recovered and remains a threat to the ecosystem.

The report, authored by five prominent marine scientists, strongly contradicts media reports that suggest that only 25 percent of the oil from the Deepwater Horizon oil spill remains.

"One major misconception is that oil that has dissolved into water is gone and, therefore, harmless," said Charles Hopkinson, director of Georgia Sea Grant and professor of marine sciences in the University of Georgia Franklin College of Arts and Sciences. "The oil is still out there, and it will likely take years to completely degrade. We are still far from a complete understanding of what its impacts are."

The group analyzed data from the Aug. 2 National Incident Command Report, which calculated an "oil budget" that was widely interpreted to suggest that only 25 percent of the oil from the spill remained.

Hopkinson notes that the reports arrive at different conclusions largely because the Sea Grant and UGA scientists estimate that the vast majority of the oil classified as dispersed, dissolved or residual is still present, whereas the NIC report has been interpreted to suggest that only the "residual" form of oil is still present.

Hopkinson said that his group also estimated how much of the oil could have evaporated, degraded or weathered as of the date of the report. Using a range of reasonable evaporation and degradation estimates, the group calculated that 70-79 percent of oil spilled into the Gulf still remains. The group showed that it was impossible for all the dissolved oil to have evaporated because only oil at the surface of the ocean can evaporate into the atmosphere and large plumes of oil are trapped in deep water.

On a positive note, the group noted that natural processes continue to transform, dilute, degrade and evaporate the oil. They add that circular current known as the Franklin Eddy is preventing the Loop Current from bringing oil-contaminated water from the Gulf to the Atlantic, which bodes well for the East Coast.

Joye said that both the NIC report and the Sea Grant report are best estimates and emphasizes the need for a sustained and coordinated research effort to better understand the impacts of what has become the world's worst maritime oil spill. She warned that neither report accounted for hydrocarbon gasses such as methane in their oil budgets.

"That's a gaping hole," Joye said, "because hydrocarbon gasses are a huge portion of what was ejected from the well."