Defiant Japan: Killing Whales Is the Only Effective Way to Study Them

'Bycatch' Whaling A Growing Threat To Coastal Whales Off Japan, Korea; $100,000 For A Minke 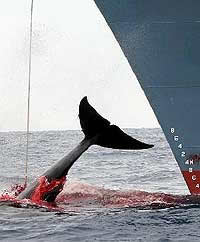 A Japanese harpooner allegedly rammed Greenpeace activists in the Antarctic, and the country's whaling industry lashed out at opposition to its bloody trade.

In a rare public statement, Japan Whaling Association president Keiichi Nakajima declared that killing the giant mammals was the only effective way to study them.

Mr Nakajima also called on countries like Australia to tolerate the culls out of respect for "cultural diversity".

Mr Nakajima then directed his tirade at Greenpeace, whose anti-whaling vessel Arctic Sunrise was allegedly rammed by a Japanese ship in Antarctic waters yesterday.

"The mother ship was transferring whale meat when it suddenly dropped its mooring lines and started its engines," Mr Rattenbury said.

"It came towards us at such a speed that we were unable to avoid it."

Mr Rattenbury said his 57-strong crew, including five Australians, had three minutes to prepare for impact.

Greenpeace's boat suffered a 3m gash to its bow, he said.