Research: 'Bad News' As Female Fish Abandoned By Males Raise Offspring On Their Own 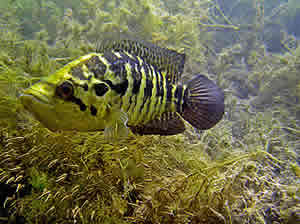 VICTORIA, Australia -- Caring for children can be a tough job, particularly if you are a female cichlid fish.

Native to the crater lakes of Nicaragua, cichlid fish look after their young by defending them against would-be predators. While male and female cichlid fish generally share parental responsibilities, research shows that this is not always the case.

Conducted by an international team of researchers that included two biologists from Monash University, and published in the journal Behavioral Ecology and Sociobiology, new research has shown that male cichlid fish have a propensity to desert their mates, leaving them to then look after the young as single parents.

In an attempt to understand the ecological factors underlying this behavior, lead author, Dr Topi Lehtonen from the University of Turku in Finland, spent many hours underwater observing the parental behaviors of different cichlid fishes.

Dr Lehtonen and his colleagues, including Dr Bob Wong and Dr Andreas Svensson from Monash University and Professor Axel Myer from Konstanz University in Germany, found that mate desertion was more common among the larger cichlid species inhabiting the lakes and desertion was also more likely to take place later in the breeding season.

Dr Bob Wong, a Senior Lecturer in the Science Faculty at Monash University said the exact reasons why the male cichlid fish would abandon their mates and their offspring are not entirely clear, but the motivation is likely linked to the costs and benefits of extended care and the availability of additional mating opportunities.

"Regardless of motives, being deserted by their mate is bad news for the abandoned female cichlid fish and her young brood," Dr Wong said.

The research found that male desertion severely compromised the quality of care that females were able to provide to their young, particularly in defending their babies against formidable fish predators, such as the bigmouth sleeper fish.

"The findings provide important insights into animal mating systems, the evolution of parental care and the costs and benefits of caring for offspring," Dr Wong said.